Hello and welcome to the 255th installment of the SWD.

Demonstrations were held in the TFSA‘s city of Al-Bab, around 500 people called for the overthrow of the President of the Syrian Arab Republic, Bashar al-Assad and lifting of the siege of the East Ghouta.

Syrian Democratic Forces released three rebel fighters belonging to the Al-Jabhat al-Shamiyah’s Kataib al-Sajidun Allah, after eight months of being imprisoned. The fighters are from Tell Rifaat and were captured about eight months ago in Al-Ghandoura village, after they got lost on the road from Azaz to Jarabulus. Syrian Democratic Forces released the fighters without any agreement or exchange deal. Reports suggest that SDF still has around 120 more prisoners accused of belonging to the Free Syrian Army, mainly from Tell Rifaat.

Military council of Al-Bab and its countryside arrested an Islamic State’s cell in the city of Al-Bab, consisting of six women and three men. The arrested cell was planning on carrying out assassinations of rebel elements across the Al-Bab. According to the commander of the military council, Muhammad al-Tawil, the group will be handed over to the National Police Court. Al-Tawil also added that they are closely monitoring and planning the arrestal of several other cells in the city of Al-Bab, belonging to the Syrian government and the Islamic State.

Faylaq al-Sham’s element was wounded by an improvised explosive device, which exploded on the road close to Kafruma, as the element was passing by on a motorcycle. The injured individual was transferred to a hospital in Turkey for treatment.

Thirty Ahrar al-Sham’s fighters graduated from the “commandos” (Al-Maghawir) camp in Al-Houlah area, Northern Homs pocket. The commandos will be deployed to several fronts in the northern Homs, with the primary mission to address SAA‘s infiltration attempts on the pocket. 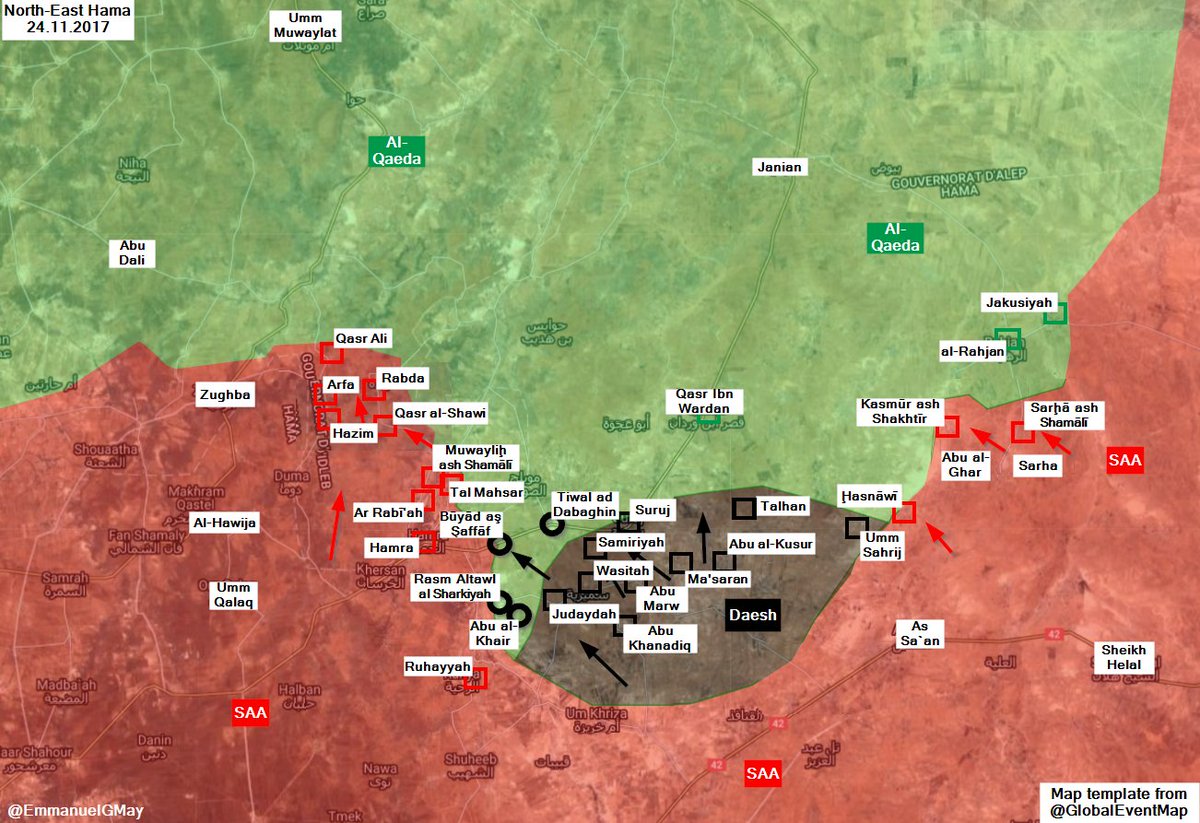 Unconfirmed reports suggest that the Islamic State recaptured Al-Quaraya from the Syrian Arab Army, after the latter captured it yesterday. Islamic State allegedly recaptured the several points in Al-Quaraya and Al-Ashara that SAA managed to capture under the cover of the Russian Air Force.

Syrian Arab Air Crescent in cooperation with the International Federation of Red Cross and Red Crescent and the United Nations delivered relief aid convoy to the civilians in Al-Bukamal (Albu Kamal).

Ahrar al-Sham’s spokesman for the East Ghouta, Mundhir Fares stated that AAS maintains the control of its positions in the ‘Army Armored Vehicle Base’ in Harasta. Clashes continue between SAA and AAS in the area, as the AAS‘ spokesman denied rumors about the group’s retreat from its positions.

Sharia Council of Damascus and its countryside cancelled the Friday prayers in the rebel-held localities of East Ghouta. The council stated that the prayers were cancelled in order to preserve the lives of civilians.

Syrian Arab Army and Hezbollah are reinforcing their positions in the “Triangle of Death” area located between the Damascus, Daraa, and Quneitra governorates. The aforementioned forces erected earth mounds near Umm al-Aeusij in the direction towards Tell al-Hara. The defenses were also reinforced in Khirbet Koum, north of Jidiya village. These developments were confirmed by the commander of the Free Syrian Army’s Jaysh al-Ababil, who stated that the group’s fighters deployed on the front lines noticed the newly-erected barriers.

Demonstrations were held by the people of Inkhil demanding the lifting of the siege of the East Ghouta. Around 300 people participated in the demonstrations.

Iraqi forces destroyed a dozen of IS’ vehicles, five SVBIEDs, two bulldozers, and detonated more than 450 improvised explosive devices during the second phase of the operation to clear desertous area of Nineveh, Salah al-Deen, and Anbar governorates.

Al-Hashd al-Shaabi’s Harakat Hezbollah al-Nujaba will reportedly hand over its weapons to the Iraqi Army after the defeat of the Islamic State. Al-Nujaba’s secretary general, Sheikh Akram al-Kaabi said that the IS fell militarily in Iraq and Syria, but pockets of the Islamic State still remain in the two countries. Al-Kaabi pointed out that the group formed Liwa Tahrir al-Joulan (The Golan Liberation Brigade) in Syria. Al-Kaabi finished the television interview by saying that Al-Nujaba will participate in repelling any forms of Israeli aggression aimed at Hezbollah.

Between the 20th and the 23rd of November 2017 CJTF-OIR has conducted two strikes in Syria. CJTF-OIR‘s main focus in Syria at the moment is Deir al-Zour-Albu Kamal region where they did two strikes supporting SDF‘s operations against IS destroying two IS vehicles.