Hello and welcome to the 254th installment of the SWD.

Improvised explosive device planted by unknown individuals exploded as the group of civilians was passing by, near the town of Atma. The explosion injured three children and a woman, who were transferred to a hospital in the vicinity. 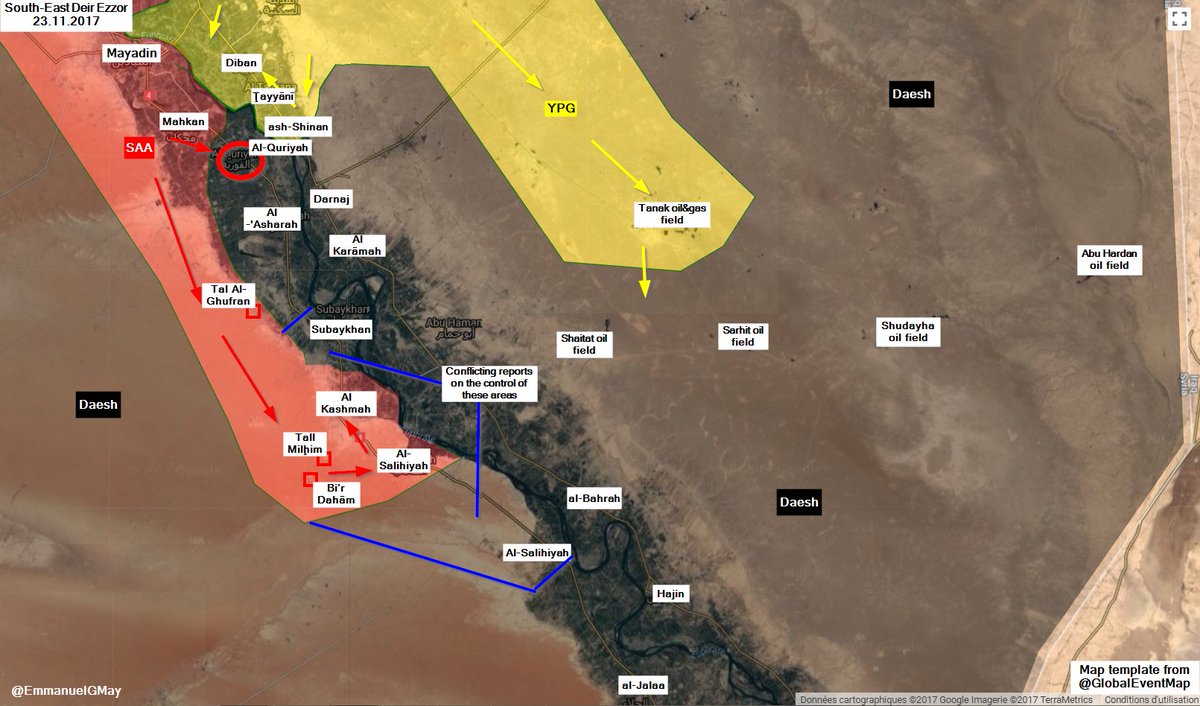 Syrian Arab Army targeted Faylaq al-Rahman’s tunnel in the Jobar neighborhood, resulting in its collapse and injury of 20 FAR‘s fighters. The injured fighters were transferred to a medical point in the nearby Ain Terma.

Rebel forces shelled several areas of the city of Damascus and its surroundings, killing one civilian and wounding another one. Three mortar shells over Al-Duwaiyelah wounded a civilian, who died of his injuries. The shelling of Jaramana with four mortar shells wounded a civilian. The rebel shelling also targeted Al-Adawi, Al-Urwar, Al-Qassa, Dahiyat al-Assad, and Bab Touma neighborhoods, Al-Sitt garage, and the vicinity of Al-Baitra roundabout.

The local council of Zamalka issued a statement accusing the Syrian Arab Army for the yesterday’s food poisoning which killed three and affected 24 civilians in the locality. According to the local council, due to the siege of the East Ghouta, basic materials are scarce and expensive, forcing civilians to buy items unfit for human consumption, such as the salt, which caused yesterday’s food poisoning. Zamalka’s council called for the United Nations and the Security Council to intervene and lift the siege of the East Ghouta.

Syrian Arab Army reopened checkpoint in Babila-Sayidi Miqdad area, allowing the food to enter the locality. The checkpoint was closed for around 10 days, and was reopened after the talks with the reconciliation committees in Babila.

Syrian Arab Army captured the southern part of Beit Teemah after capturing the nearby hills Halef Shor and Teen from the rebel Jabal al-Sheikh operations room. Rebel “Daraa Martyrs Documentation Office” reported death of a Hayat Tahrir al-Sham’s fighter from Daraa, due to clashes with the Syrian Arab Army at the outskirts of Beit Jinn.

Syrian Arab Army honored the former commander of the Free Syrian Army’s Al-Liwa al-Awal in Barzeh, Muawiya al-Beqai (Abu Bahr). Abu Barh was one of the FSA fighters to accept the reconciliation in Barzeh and join the SAA‘s Qalamoun Shield forces. Abu Bahr received a “shield of honor” award and 800,000 Syrian pounds (1550 dollars) for his participation in the battles against the Islamic State in the eastern Hama.

According to the Iraqi Joint Operations, the newly-launched Iraqi forces’ operations, which started south of Al-Hadher already resulted in the capture of 77 villages, including the Umm al-Aqarib bridge and Jinif (Geneva) airport. The area cleared today by the Iraqi forces is reported at 5800 square kilometers (2239 square miles). Islamic State lost nine armored vehicles during today’s operations.

Islamic State took responsibility for the suicide attack that targeted the city of Jalalabad today, in Nangarhar province. The attack killed eight and wounded 17 civilians.