Hello and welcome to the 249th installment of the SWD.

Three civilians were killed and two injured by a landmine, which exploded in Jandairis district, southwest of Afrin. The explosion occurred during an olive harvest in a field near the village of Jalameh. Reports suggest that the landmine was a remnant of the Hayat Tahrir al-Sham’s fighters, due to the close proximity to the front line.

Large Turkish military convoy entered Syria through Kafr Lusin village. The convoy reportedly consisted of more than a hundred military vehicles, from tanks to tankers. After entering Kafr Lusin, the convoy continued through the villages of Qah and Salwa, on the road towards Darat Izza. Unconfirmed reports suggest that Turkey will establish an observation point near Anadan, its 3rd in Syria.

Free Syrian Army’s Firqat al-Safwa arrested a group of its fighters that tried to flee to the Syrian Democratic Forces’ territory in northern Aleppo. Firqat al-Safwa stated that the group was under the command of Abu Huthayfah al-Diri and tried to flee with weapons and equipment. Al-Safwa will hand over the arrested group to the court to judge them.

Free Syrian Army’s Jaysh Maghawir al-Thawra dismissed around 180 of its fighters from Al-Tanf crossing. The military spokesman of the group, known as Abu al-Atheer al-Khabouri said that the fighters were dismissed due to their non-compliance and tarnishing of the group’s reputation. Dismissed individuals returned their equipment and each received $2000, as they made their way back to Al-Rukban refugee camp. Al-Khabouri also said that the CJTF-OIR is not marginalizing the group nor prioritizing Syrian Democratic Forces over it. Jaysh Maghawir al-Thawra is being maintained for the second stage that is more politically-focused rather than militarily-focused, according to Al-Khabouri.

Syrian Arab Army and allies took control of the southern neighborhoods of Albu Kamal (Al-Bukamal) from the Islamic State. SAA and allies are currently moving into the western neighborhoods, under the cover of the Russian Air Force.

Syrian Arab Army reportedly reached the outskirts of IS-held Al-Salihiyah and established the fire control over the locality. The capture of Al-Salihiyah will create an Islamic State’s pocket between the locality and Al-Mayadeen.

Military correspondent of Hezbollah-linked Al-Elam al-Harbi Markazi (War Media Center), Muhammad Yahya Hanbalas was killed by the Islamic State in Al-Bukamal, as he was covering military operations in the city.

Syrian Arab Red Crescent delivered international aid to the city of Deir al-Zour, the aid was provided by the International Red Cross and Red Crescent Movements, and the United Nations. The aid convoy consisted of 28 trucks. 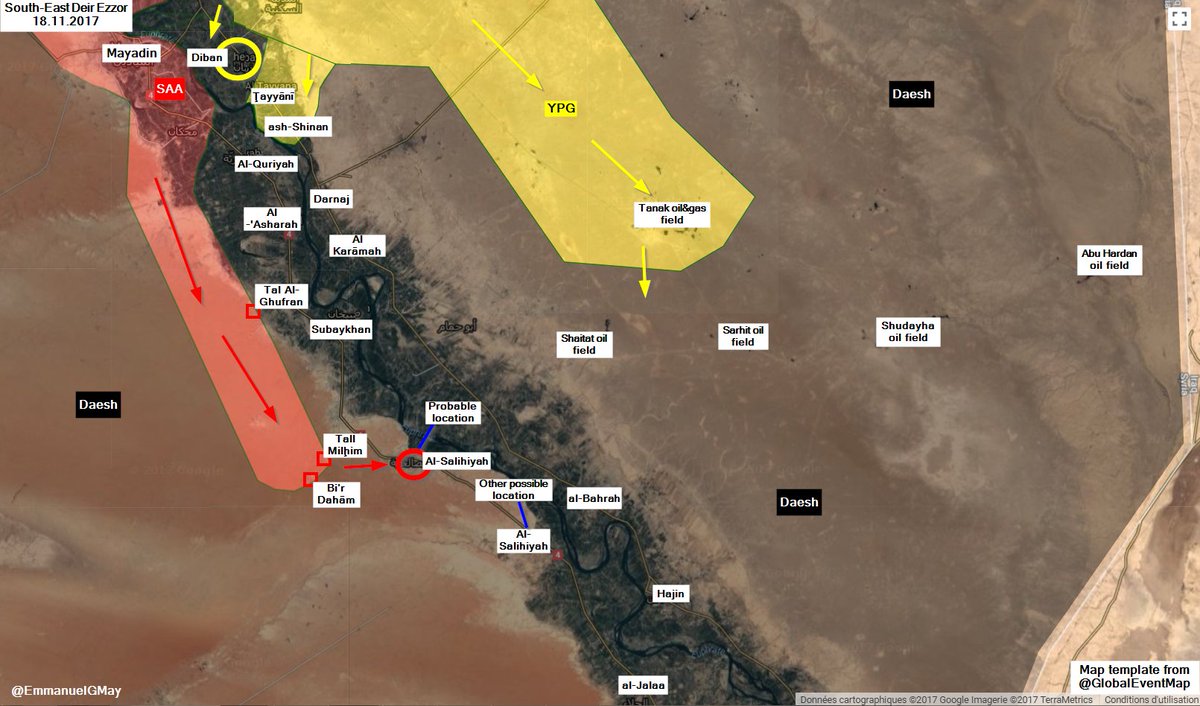 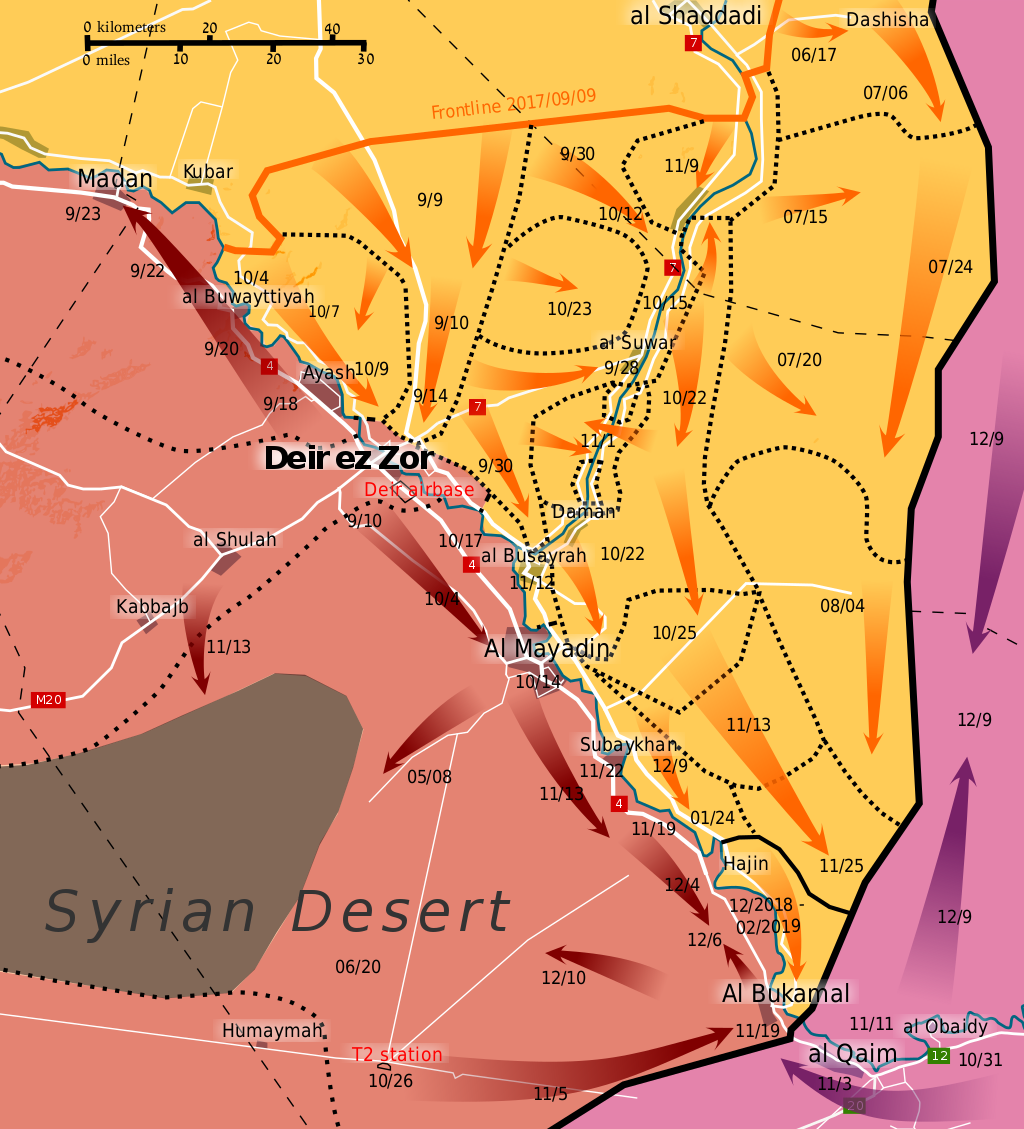 Syrian Arab Army reportedly launched a counterattack against the Ahrar al-Sham in ‘Army Armored Vehicle Base’ in Harasta. Reports suggest that the SAA recaptured a warehouse for spare vehicle parts, as well as allegedly surrounded Ahrar al-Sham’s fighters in the section for diesel vehicles at the technical institute.

Syrian Arab Army launched an attack against the rebels stationed in Beit Jinn pocket. SAA captured Fajr 1 and Fajr 2 hills between Hina and Kafr Hawar towns. The capture of the aforementioned hills was confirmed by the director of the information office of the rebel Jabal al-Sheikh operations room, Iyad al-Safadi. Al-Safadi said that they retreated from the region due to the pressure of the civilians in Kafr Hawar. According to Al-Safadi, SAA is looking to capture hills on the outskirts of Beit Jinn, in order to separate the pocket into two, isolating Beit Saber, Batayma, and Kafr Hawar.

The local council of Kafr Shams established a police force in order to maintain security in the locality. The president of the council, Thabit al-Bashir said that 10 individuals were appointed in the center of the city after a meeting with the Free Syrian Army’s elements. The police force has been established in an attempt to reduce thefts and shooting in the locality. Situation in Iraq in 2014 and 2017, according to the Iraqi Joint Operations.

Islamic State’s Amaq Agency reported the assassination of the element of the Afghan National Security Forces in the village of Jambil, Sawkai directorate, Kunar province.

Islamic State claimed an inghimasi (suicide fighters) attack killed a member of the Pakistani police and wounded another one, in Zakura area, Srinagar city. It is important to note that the city of Srinagar is administratively part of India’s Jammu and Kashmir state.