Hello and welcome to the 246th installment of the SWD.

Harakat Nour al-Deen al-Zenki handed over Hayat Tahrir al-Sham bodies of three HTS‘ fighters killed during the clashes at the outskirts of Taqad. The director of media office of HNDZ, Ahmed Hamahar reported that the deal was mediated by the Syrian Civil Defence (The White Helmets).

Car bomb exploded in the TFSA-held Qabasin, at the eastern entrance of Al-Khansaa school. One person was wounded by the explosion, which also set fire on a vehicle loaded with fuel. Free Syrian Police was at the scene of the incident, collected evidence and opened investigation.

Three children were killed by a left over Islamic State’s landmine in the city of Al-Bab. The incident occurred in the western part of Al-Bab, near the Al-Azm mosque.

Three Free Syrian Army’s groups signed the ‘Geneva Call’s humanitarian commitments˘’ after more than eight months of preparations, according to the director of the political bureau of the ‘Firqat al-Hamza – Quwwat Khasa’, Mohammed Abdullah. Three groups that signed the commitments are Firqat al-Hamza, Liwa al-Muetasim and Al-Liwa 51.

Three people were killed by an explosion in Al-Taibat, the object that caused the explosion was described as an unexploded ordnance from the Syrian Arab Army’s shelling on the locality. The explosion occurred when the deceased individuals discovered the object and tried to interact with it.

Syrian Arab Army made more advances in the northeastern Hama against the rebel forces, reportedly capturing Arafa, Al-Kikiyah, Al-Hazm, and Rabda. Hayat Tahrir al-Sham’s Ibaa News Agency reported death of a group of SAA‘s soldiers and a destruction of a tank with an anti-tank guided missile in Al-Hazm. 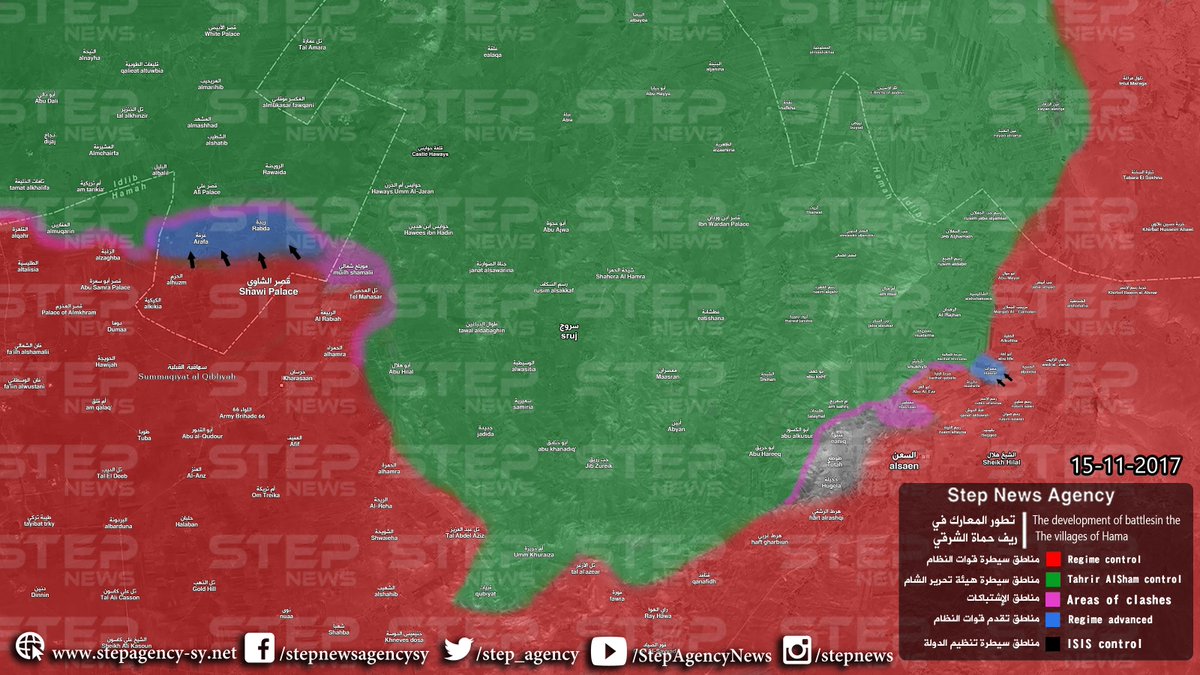 Situation in the northeastern Hama, HD version of this map can be found here. Source: Step News Agency

Syrian Democratic Forces captured Al-Hawayij from the Islamic State. The capture was officially announced by the Syrian Democratic Forces’ Deir al-Zour Military Council, which also stated that the SDF started operations to capture Dhubyan from the Islamic State. Amaq Agency claimed that the IS’ improvised explosive device killed three SDF‘s fighters near Merkada. 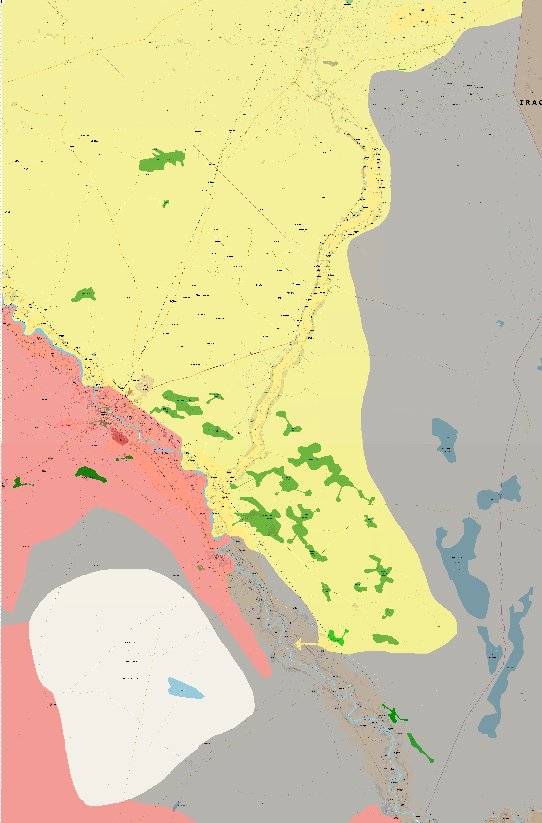 Ahrar al-Sham’s attack, backed by Faylaq al-Rahman continues on the ‘Army Armored Vehicle Base’ in Harasta. Reports suggest that the rebel forces didn’t make significant advances, but rather focused on killing several Syrian Arab Army’s commanders, such as Major General Sharaf Walid Khashaki. The rebel forces announced media silence during the attack until the objectives are achieved. Commander of the Liwa Ahifad Ali, Khaled Wajih al-Samadi and two accompanying individuals were killed by an explosion, which targeted their vehicle on the road between Samad and Samj. Liwa Ahifad Ali is a part of Quwwat Shabaab al-Sunnah, which is a part of the Free Syrian Army’s Southern Front. Quwwat Shabaab al-Sunnah reported it arrested a cell in Bosra, accused of planting improvised explosive devices across the governorate.

Three Hayat Tahrir al-Sham’s fighters were injured in Al-Naimah, after one of the fighters accidentally caused the explosion of the improvised explosive device. The fighters were taken to a hospital in Tell Shihab.

Free Syrian Army’s Al-Wiyat Mujahidi Hawran arrested three individuals after an incident occurred at the group’s checkpoint in Inkhil. The arrested individuals allegedly opened fire on a checkpoint during the inspection, one of the attackers was wounded in the process. The director of the Media Office in Al-Wiyat Mujahidi Hawran, known as Abu Qais stated that the individuals are from the southern Damascus’ neighborhoods under the control of the Islamic State. The attackers had in their possession two explosive belts and two weapons. Investigation is in progress to identify the individuals, and find out if they belong to the Islamic State or the Syrian government, according to Abu Qais.

Unknown gunmen tried to assassinate the deputy leader of the Free Syrian Army’s Jaysh Ahrar al-Eashayir, Hussein al-Masaid on the road between Al-Mutaiya and Al-Taybeh. Hussein al-Masaid stated that the gunmen fired at his car and tried to block the road. Al-Masaid wasn’t injured in the attack, and added that he received threats from the telephone numbers tracing back to the elements of the Islamic State or the Syrian government.

The commander of the Iraqi forces’ operation to capture Rawa and Al-Rumana from the Islamic State, Abdul Amir Rashid Yara announced IS’ losses for the period from the 13th till the 15th November. According to the commander, Iraqi forces destroyed six SVBIEDs, ten vehicles, and eight motorcycles, as well as killed three suicide bombers and more than 45 IS’ fighters.