Hello and welcome to the 242nd installment of the SWD.

Harakat Nour al-Deen al-Zenki’s military commander, Hossam Atrash accused Faylaq al-Sham of supporting Hayat Tahrir al-Sham in the recent infighting. Atrash claimed that FAS handed over Hawajzeh village in the western Aleppo, giving HTS ability to transport its troop to it, and carry out infiltration (inghimasi) operations on the front against HNDZ. In return for handing over Hawajzeh, FAS was reportedly given HTS-held territory in Hama’s countryside, so that the latter can fully devote to fighting HNDZ.

Faylaq al-Sham denied Harakat Nour al-Deen al-Zenki’s accusations and asked Hossam Atrash to provide evidence for his claims, as his comments are just creating unnecessary unrest/tensions. FAS denied handing over Hawajzeh to HTS, and said that it has actively worked on creating barriers close to the conflict areas, preventing convoys from passing and closing off/isolating towns and villages not affected by the infighting.

Ahrar al-Sham and Jaysh al-Ahrar are reportedly ready to enter the HNDZ–HTS infighting, on HNDZ‘s side. Director of the Public Information Office in Ahrar al-Sham, Abu Abdul Rahman Al-Banashi stated that HNDZ, AAS and JAA signed a joint defense agreement before the infighting even happened. Military commander in AAS, Abu Obaida also confirmed that there is an agreement in place and that AAS is ready to enter the battle at any moment. However, neither the AAS nor JAA have entered the infighting yet, despite their reported readiness.

Several reconciliation attempts between HNDZ and HTS have failed, with each side accusing each other for the failure. Member of HTS‘ Shura Council, Abu Maria al-Qahtani said that HNDZ impeded the reconciliation path, set impossible conditions/terms, and in the end didn’t even show up to the meeting with the tribal leaders. However, HNDZ denied these accusations and said that they have agreed to hold a meeting in Anadan in the presence of the cleric Abdullah Al-Muhaisni, but HTS reportedly failed to respond to the initiative.

Two unknown gunmen on a motorcycle tried to assassinate Director of Media of ‘Idlib Health Directorate’, Abdul Aziz Ajini and his son on the road between Ariha and Idlib. Ajini holds an MA degree in English literature and was employed at the University of Aleppo until the June of 2011, after which he joined the movement against the government of Bashar al-Assad. Ajini gave a personal statement regarding the incident, saying that he opened fire back on the gunmen, and that he does not wish to accuse any rebel group, as there is a possibility that the assassins were affiliated with the Syrian government.

Syrian Democratic Forces entered Al-Shuhail and are clashing with the Islamic State’s elements inside the locality.

Reports about Islamic State regaining control over Al-Bukamal (Albu Kamal) keep growing, after yesterday’s reports about IS’ partial recapture of the city, reports today suggest that IS is once again in full control of Al-Bukamal.

Free Syrian Army’s Jaysh al-Ababil repelled Syrian Arab Army’s infiltration attempt in the area between Simlin and Zamrin villages. Commander in the group stated that they spotted 11 SAA‘s soldiers with explosive charges trying to infiltrate the area. Commander also stated that several of SAA‘s soldiers were killed and wounded in the clashes, but they were unable to determine the number. Jaysh al-Ababil did not suffer any casualties during the encounter with the SAA.

Iraqi forces officially started an operation to capture Rawa and Al-Rumana areas in the western Anbar from the Islamic State. Iraqi Army’s 7th and 8th Infantry Divisions, backed by Al-Hashd al-Shaabi (Popular Mobilization Units) made big gains against the IS during the first phase of the operation, which includes the capture of the upper Euphrates area. Iraqi forces captured Al-Rumana bridge, Al-Rumana, Albu Ebayd, Albu Fraj, Albu Shaeban, Al-Baghouz, Al-Rabt, Albu Hardan, Al-Eash, Khatila, and Daghima, reaching the Iraqi-Syrian border on the upper side of the Euphrates. 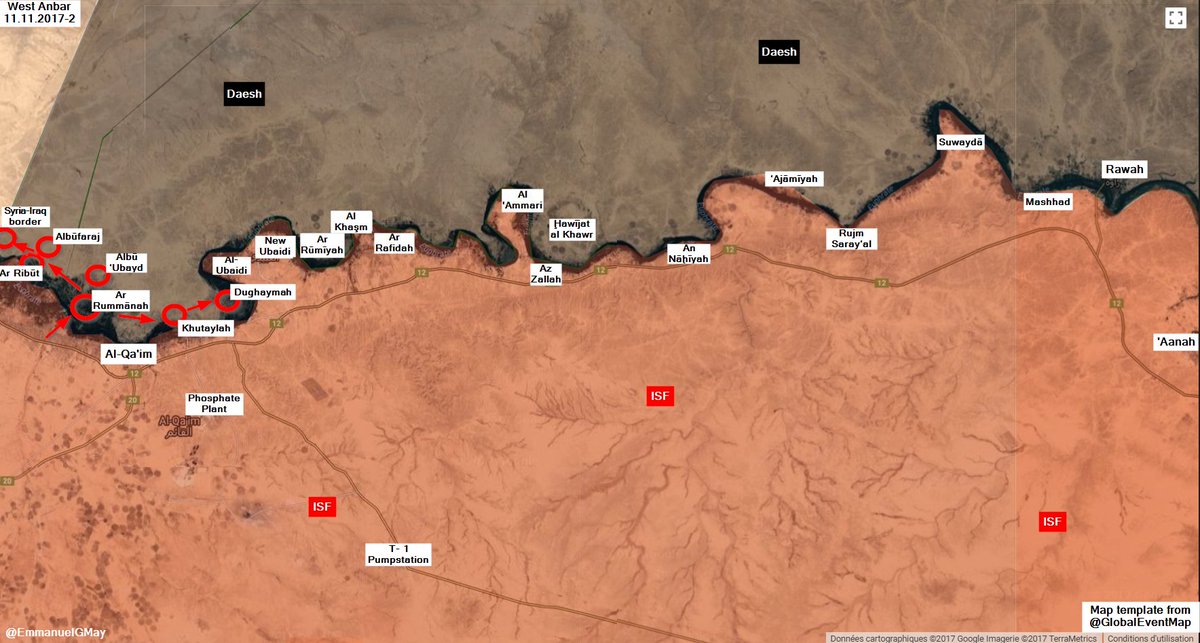 Islamic State detonated two improvised explosive devices against the Afghan National Army in the village of Senkina, Jabrhar directorate. The explosions killed and wounded five Afghan soldiers and damaged a Humvee, according to Amaq.