Hello and welcome to the 241st installment of the SWD.

Hayat Tahrir al-Sham reportedly arrested Osama Mohammed, preacher and imam of a mosque in Aleppo’s countryside. Mohammed was arrested due to his close relationship with Harakat Nour al-Deen al-Zenki.

Liwa al-Farouq and Saraya al-Aqsa defected from Hayat Tahrir al-Sham, due to latter’s recent targeting of rebels and civilians.

Hayat Tahrir al-Sham’s Ibaa News Agency announced Al-Rashadiya and Tel al-Sawan as recaptured from the Syrian Arab Army and allies. According to the commander in Hayat Tahrir al-Sham, Abu Faisal, a group of HTS‘ inghimasi (suicide fighters) stormed Al-Rashadiyah and clashed with SAA for several hours before capturing the locality. Abu Faisal stated that around 20 SAA and allied soldiers were killed, and three vehicles seized.

Harakat Nour al-Deen al-Zenki officially “declared war” on Hayat Tahrir al-Sham in a video statement by HNDZ‘s deputy leader, Ali Saido. Saido stated that the war was started by HTS and it will continue until the defense of religion and revolution.

Turkish border guards opened fire on a group of civilians trying to illegally enter Turkey near the village of Al-Duraiya in Darkush area. Three civilians were killed and four injured by the Turkish Gendarmerie.

Two children were killed and a third one injured when a landmine exploded in the village of Tal Salmu.

Reports about Islamic State still controlling Al-Bukamal, at least partially, started to appear today, mainly due to the lack of footage from the city. Ministry of Defence of the Russian Federation issued a statement today regarding the Syrian Arab Army’s capture of Al-Bukamal, also stating that demining operations started in the city.

Islamic State and Syrian Arab Army continue to clash in the area south of Al-Mayadeen, the former’s news agency reported death of ten latter’s soldiers and capture of one element. Additionally, Amaq released another statement regarding this area, reporting destruction of two SAA‘s tanks with anti-tank guided missiles. 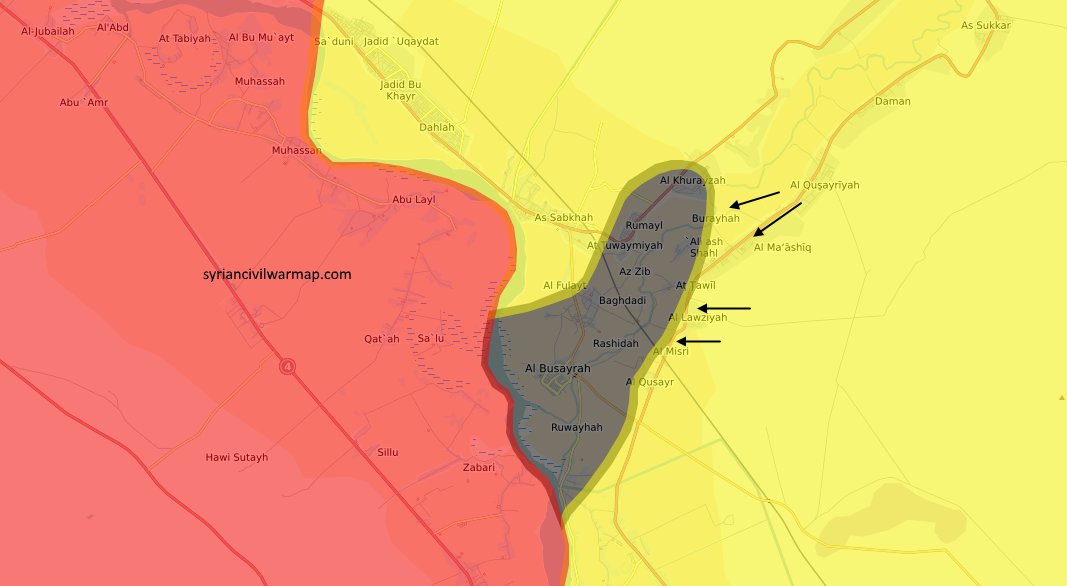 Journalist Imran Awiti, known as Omar al-Joulani, was found dead after being kidnapped by unknown gunmen in Jasim. Awiti’s body was found with traces of torture. The rebel-held part of Daraa governorate has been hit by the wave of assassinations lately, but the usual targets are the Free Syrian Army’s commanders.

One person was killed and another injured by an improvised explosive device, which exploded on the road between Al-Karak al-Sharqi and Rekhum.

Between the 6th and 9th of November 2017 CJTF-OIR has conducted 11 strikes in Syria. CJTF-OIR‘s main focus in Syria at the moment is Deir al-Zour region where they did ten strikes supporting SDF‘s operations against IS destroying an IS line of communication, four fighting positions and an IS vehicle.

Other area where one strike occurred is Al-Bukamal (Albu Kamal) destroying four IS logistics hubs. Full report on CJTF-OIR strikes conducted in both Syria & Iraq can be found here.

Islamic State’s inghimasi (suicide fighters) launched an attack against the Egyptian Army’s position yesterday, south of Al-Shakh Zawid in the northern Sinai. According to Amaq, IS killed an officer and several Egyptian soldiers in the attack.