Hello and welcome to the 236th installment of the SWD.

Free Syrian Army’s Liwa al-Shamal released a statement last night saying that they have repelled Syrian Arab Army’s infiltration attempt on Tadef front. Furthermore, the group said that one of the SAA‘s units was targeted by a landmine, which caused several injuries.

Part of the locals in Manbij protested in several sections of the city and surrounding villages against the Syrian Democratic Forces’ decision to enact forced conscription. Several shops in the city were closed as a form of protest. Leader of the Free Syrian Army’s Liwa al-Shamal, Abu al-Faraq, claimed that SDF arrested a high number of civilians that were protesting. Al-Faraq added that the shooting happened in Jarabulus district. Improvised explosive device planted by unknown individuals on a vehicle exploded at the computer school, in the city of Maarrat Misrin.

Syria Civil Defence (The White Helmets) found a mass grave in the village of Al-Hamidiyah, southwest of Maarat al-Numaan. The mass grave reportedly consists of 62 Syrian Arab Army’s soldiers killed during the battles for Wadi Deif and Al-Hamidiyah army bases in the late 2014. Idlib’s prisoners’ affairs committee said it will transfer the remains to the cemetery in Idlib. However, Syrian Civil Defence’s activist from Maarat al-Numaan, Mustafa Gharib said that the cemetery remained intact. The prisoners’ affairs committee transferred the remains to an undisclosed location and they will reportedly be used in exchange deals with the Syrian government. 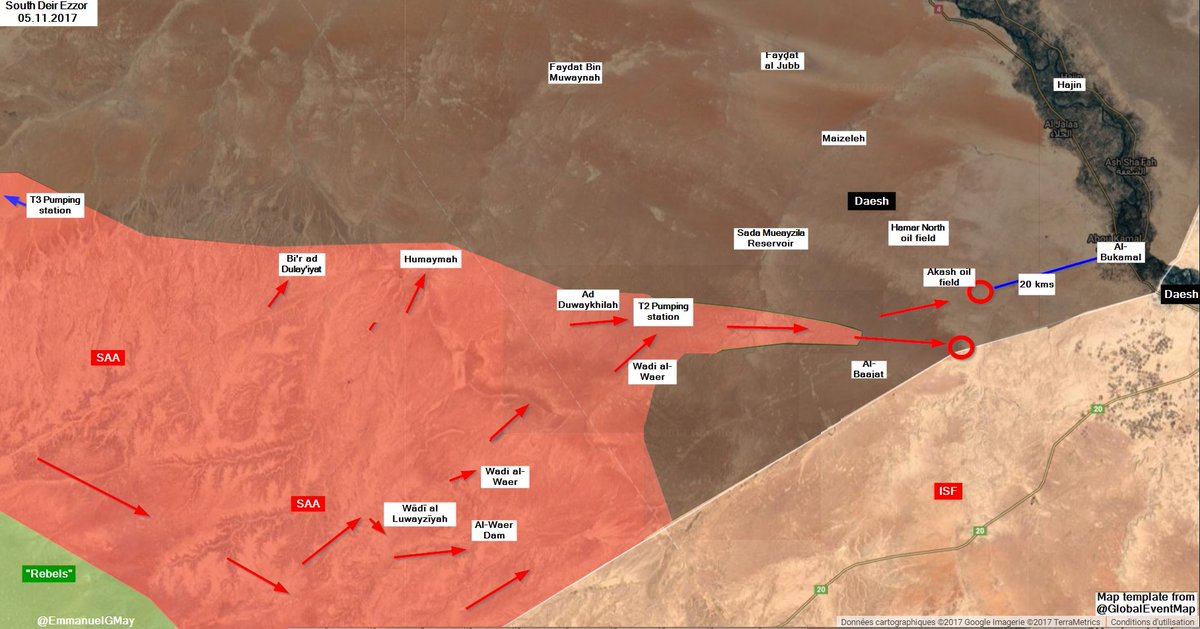 Unconfirmed reports claimed that the ‘Local Council of Douma city’ suspended its work until further notice, due to the air strikes and the recent bombardment that targeted the city.

Twin suicide attack took place on Atlas street, in the central Kirkuk, next to Saraya al-Salam’s (Peace Companies – Peace Brigades) office. Saraya al-Salam is an armed group, part of Al-Hashd al-Shaabi (Popular Mobilization Units) and under the control of the cleric Muqtada al-Sadr. Iraqi Ministry of Interior stated the preliminary casualties for the twin suicide bombing, reporting death of a civilian and injury of additional 16. Unofficial casualty numbers have been reported at six dead and dozen more injured. No one has taken the responsibility for today’s twin attack, at least for now. Situation in the western Anbar, according to the Iraqi Joint Operations.

On the 3rd of November 2017 CJTF-OIR has conducted four strikes in Syria. CJTF-OIR‘s main focus in Syria at the moment is Deir al-Zour region where they did three strikes supporting SDF‘s operations against IS destroying an IS transport vehicle, an indirect fire weapon, a crew-served machine gun, and two defensive fighting positions.

Other area where one strike occurred is Al-Bukamal (Albu Kamal) destroying an IS tactical vehicle. Full report on CJTF-OIR strikes conducted in both Syria & Iraq can be found here.