Hello and welcome to the 152nd installment of the SWD.

Katibat al-Shahid Alaa Barir (Martyr Alaa Barir Battalion) joined Liwa al-Shamal in northern Aleppo, as confirmed by the latter’s statement. The battalion is under the command of Hasinki ‘Abu Alaa’.

Syrian Democratic Forces and Islamic State clashed in several districts of Raqqa, with reports about the former advancing in Al-Dariyah and Al-Barid.

Yesterday, Islamic State’s fighters launched an attack on SDF-held Kassra Mohammed Ali village, south of Raqqa. According to Amaq, seven SDF‘s fighters were killed in the attack. IS’ SVBIED also targeted the village, destroying six SDF‘s vehicles, and giving IS’ fighters to loot the affected vehicles. 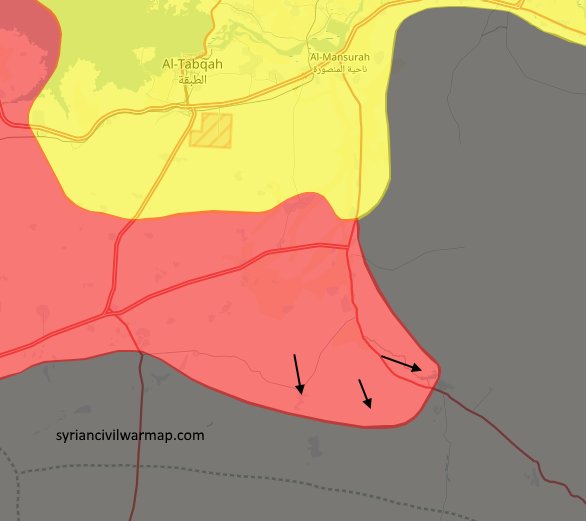 After more than a day of clashes, Syrian Arab Army reportedly managed to capture “meat company building” and surrounding areas from Faylaq al-Rahman, in Ain Terma.

Syrian Arab Air Force carried out over a dozen of air raids over several rebel-held localities in East Ghouta. City of Zemalka was targeted by at least two air raids, which resulted in death of one person and injury of several others. Five people were reportedly killed by SyAAF’s raids over Ain Terma, the raids also caused fire and destruction of a residential building. One SyAAF’s raid targeted the outskirts of Kafr Batna.

Jaysh al-Islam and Hayat Tahrir al-Sham have started clashing once again, in the farms area near Al-Ash’ari.

One of the elements of the Islamic State-affiliated Jaysh Khalid ibn al-Walid, Mahmud Munir Malkawi, reportedly executed his father in the group-held Yarmouk Basin. Motives of the reported execution are still unknown.

On the 13th of July 2017 CJTF-OIR has conducted 15 strikes in Syria. CJTF-OIR‘s main focus in Syria at the moment is Raqqa region where they did nine strikes supporting SDF‘s operations against IS destroying three IS communication towers, three fighting positions, a command and control node, a front-end loader, and an artillery system; and damaging three supply routes.