Hello and welcome to the 146th installment of the SWD.

Syrian Democratic Forces captured the farms area north of Al-Barid district. SDF also made advances in Al-Mahdi and Al-Rafiqah districts in the Old City of Raqqa, scope of the advances into IS-held areas is estimated at around 700 meters (~765 yards) and resulted in the capture of Harun al-Rashid fort.

According to Amaq Agency, IS’ SVBIED targeted SDF‘s position near the old/historic wall. Amaq also claimed that nine SDF‘s fighters were killed and four other wounded, during the clashes with IS in several areas of Raqqa city.

Ahrar al-Sham allegedly arrested a dozen of Hayat Tahrir al-Sham’s fighters, after the latter set up several checkpoints/barriers on the road between Al-Dana and Al-Atarib.

Ahrar al-Sham’s headquarters in Binnish were targeted by a huge explosion, which caused several casualties among the group’s ranks.

Jaysh al-Islam, and Hayat Tahrir al-Sham, backed by Faylaq al-Rahman, continue to clash in Al-Ash’ari area. Clashes between the two have also spread to Beit Sawa.

Five Hezbollah fighters were reportedly confirmed as killed in the clashes with rebels in Daraa city. One of the killed individuals was allegedly a child soldier.

Syrian Arab Air Force carried out eight raids over Ayb village in Al-Lajat area. One civilian was reported as killed and several as injured, due to the raids.

Iraqi security forces arrested 18 Islamic State’s fighters as they were trying to enter the camp for the displaced individuals. Several commanders of IS were among the arrested individuals.

Iraqi Air Force carried out several raids over Tal Afar, reportedly killing 12 IS’ fighters, including an official in the group. 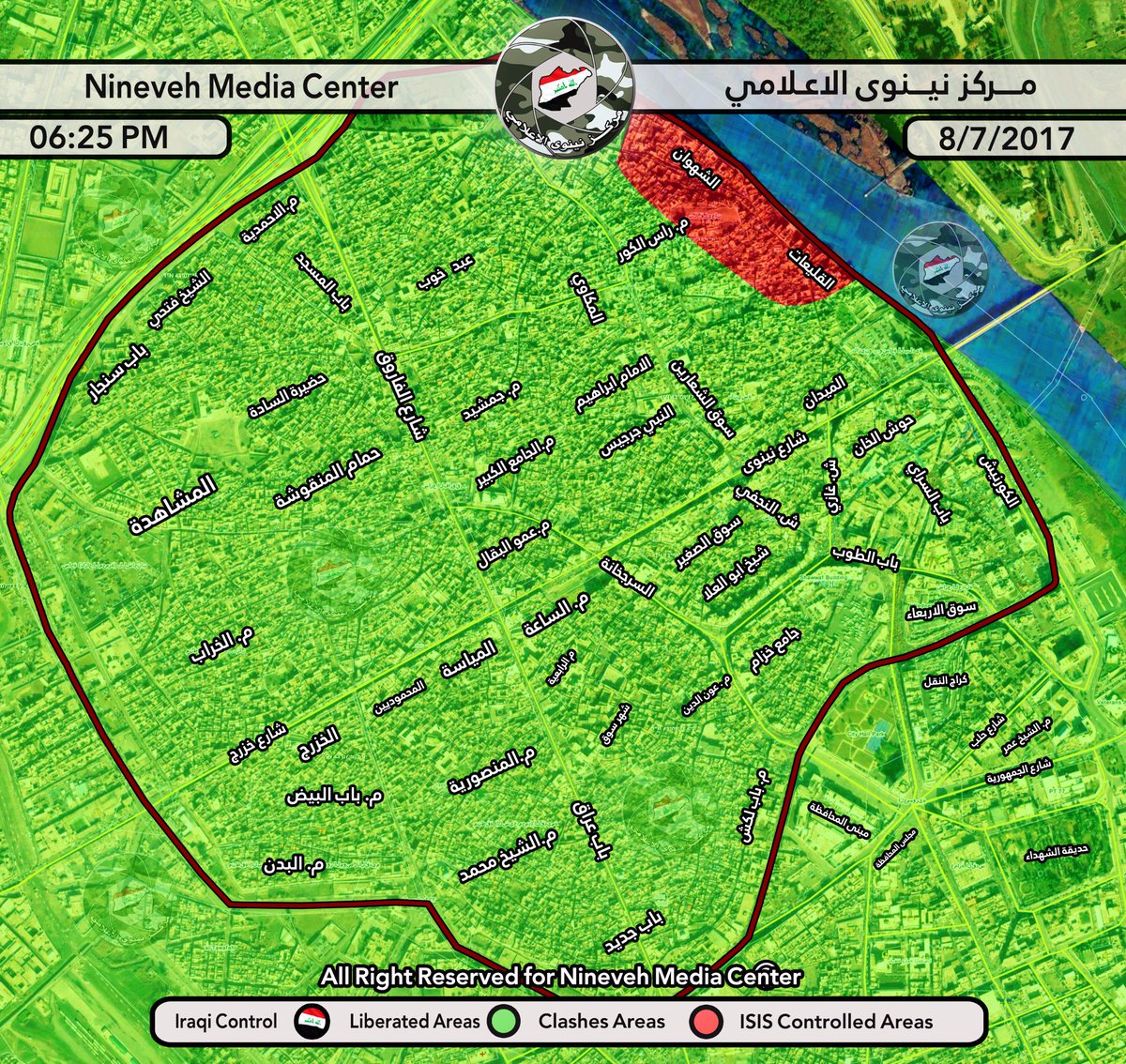 On the 7th of July 2017 CJTF-OIR has conducted 24 strikes in Syria. CJTF-OIR‘s main focus in Syria at the moment is Raqqa region where they did 18 strikes supporting SDF‘s operations against IS destroying 17 fighting positions, two vehicles, and a tunnel.