Hello and welcome to the 142nd installment of the SWD.

Another rebel weapons/ammunition depot exploded due to a heat wave currently targeting Syria. This time, a depot exploded in Marea, causing no casualties.

CJTF-OIR‘s news release regarding today’s operation to breach a small part of the historic wall:

ISIS fighters were using the historic wall as a fighting position and planted mines and improvised explosive devices at several of the breaks in the wall. SDF fighters would have been channeled through these locations and were extremely vulnerable as they were targeted with vehicle-borne IEDs and indirect fire as well as direct fire from heavy machine guns, rocket- propelled grenades and snipers as they tried to breach the Old City.

Conducting targeted strikes on two small portions of the wall allowed Coalition and partner forces to breach the Old City at a locations of their choosing, denied ISIS the ability to use pre- positioned mines, IED and VBIEDs, protected SDF and civilian lives, and preserved the integrity of the greatest portion of the wall. The portions targeted were 25-meter sections and will help preserve the remainder of the overall 2,500-meter wall. Unknown gunmen opened fire and wounded a woman, in the village of Maar Hattat, south of Maarat al-Numaan.

Two Ahrar al-Sham’s officials were kidnapped by a security force affiliated with Hayat Tahrir al-Sham and under the control of Abu Saeed Ras al-Hosn. Abu Yousef Shubak was kidnapped in front of his house in Idlib, and Ibrahim Yassin was kidnapped in Kafr Dariyan.

Iraqi forces started a new wave of attacks in the Old Mosul district, in an attempt to secure the Tigris river’s area from the Islamic State’s fighters. According to the reports, Iraqi forces were able to infiltrate more than 100 meters (~109 yards) into IS-held area.

Islamic State’s Amaq claimed death of at least 10 members of the Iraqi Federal Police due to clashes with IS at the outskirts of Bab al-Toub and Al-Kournish areas. 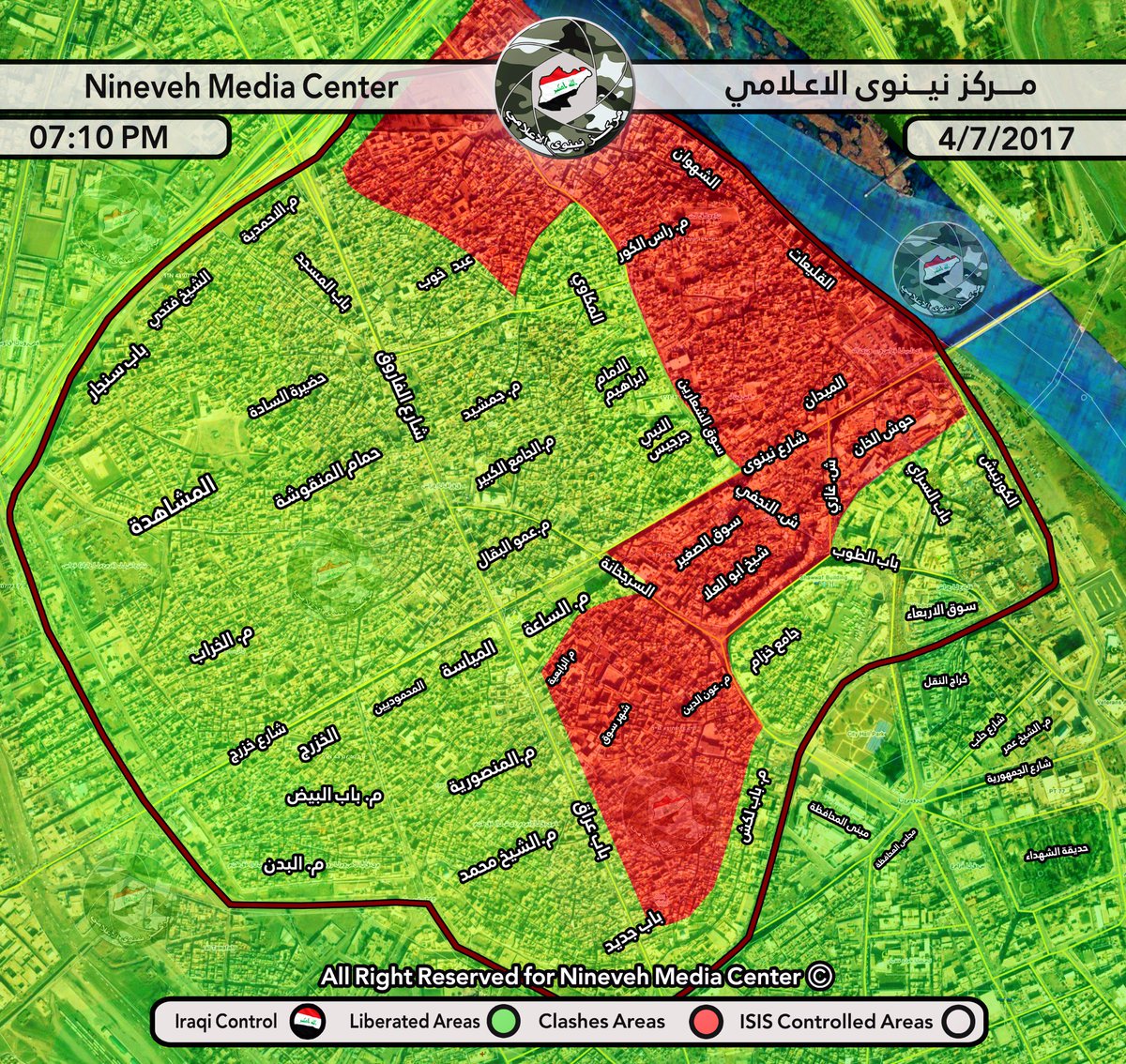 On the 3rd of July 2017 CJTF-OIR has conducted 17 strikes in Syria. CJTF-OIR‘s main focus in Syria at the moment is Raqqa region where they did 15 strikes supporting SDF‘s operations against IS destroying seven fighting positions, three mortar systems, two sections of wall, two vehicles, an anti-air artillery system, a heavy machine gun, and an explosives cache; damaging five IS supply routes; and suppressing an IS tactical unit.

Other areas where two airstrikes occurred are Abu Kamal (Al-Bukamal) and Deir al-Zour, destroying two IS well-heads. Full report on CJTF-OIR strikes conducted in both Syria & Iraq can be found here.

Nine Filipino soldiers were reportedly killed during the clashes with Islamic State’s fighters in Baling area of Marawi city.