Hello and welcome to the 140th installment of the SWD.

Syrian Democratic Forces captured Al-Hal market and its surrounding area from Islamic State in the eastern part of Raqqa city.

Islamic State’s Amaq Agency reported that the CJTF-OIR‘s airstrikes on a number of neighborhoods of Raqqa, killed 52 and injured 158 people, in the last seven days.

Islamic State destroyed Syrian Arab Air Force’s Mil Mi-8 helicopter near Al-Assad hospital with an anti-tank guided missile. The helicopter was unloading cargo when it was affected by an explosion, resulting in the destruction of a helicopter and several casualties among the Syrian Arab Army’s ranks.

Three SVBIEDs targeted the city of Damascus this morning, two of the SVBIEDs were reportedly destroyed by security forces before reaching their destinations, third SVBIED detonated at Tahrir square. Casualties from the incidents are estimated at eight killed and 12 wounded.

Rebel “Daraa Martyrs Documentation Office” reported death of two Free Syrian Army’s fighters and one Hayat Tahrir al-Sham’s fighter due to clashes with SAA in and around Madinat al-Baath, confirmed rebel death toll from the clashes is at least 10 fighters.

Rebels killed Mehdi Qais Khadr, supposed commander in Hezbollah from Kafr Mili, south Lebanon. Khadr was killed in the fighting that recently erupted across Daraa’s fronts. According to some reports, Khadr was reported as a commander of IRGC-backed Pakistani militia Liwa Zainebiyoun.

Iraqi forces reportedly captured Al-Makawi neighborhood in the Old Mosul district from Islamic State. Even though, the Old Mosul is close to being fully cleared of Islamic State’s presence, heavy clashes are still ongoing in the district, Amaq claimed death of 22 Iraqi troops due to today’s clashes.

Group of Islamic State’s fighters was arrested by Iraqi forces as the latter stormed “small market” in the Old Mosul. 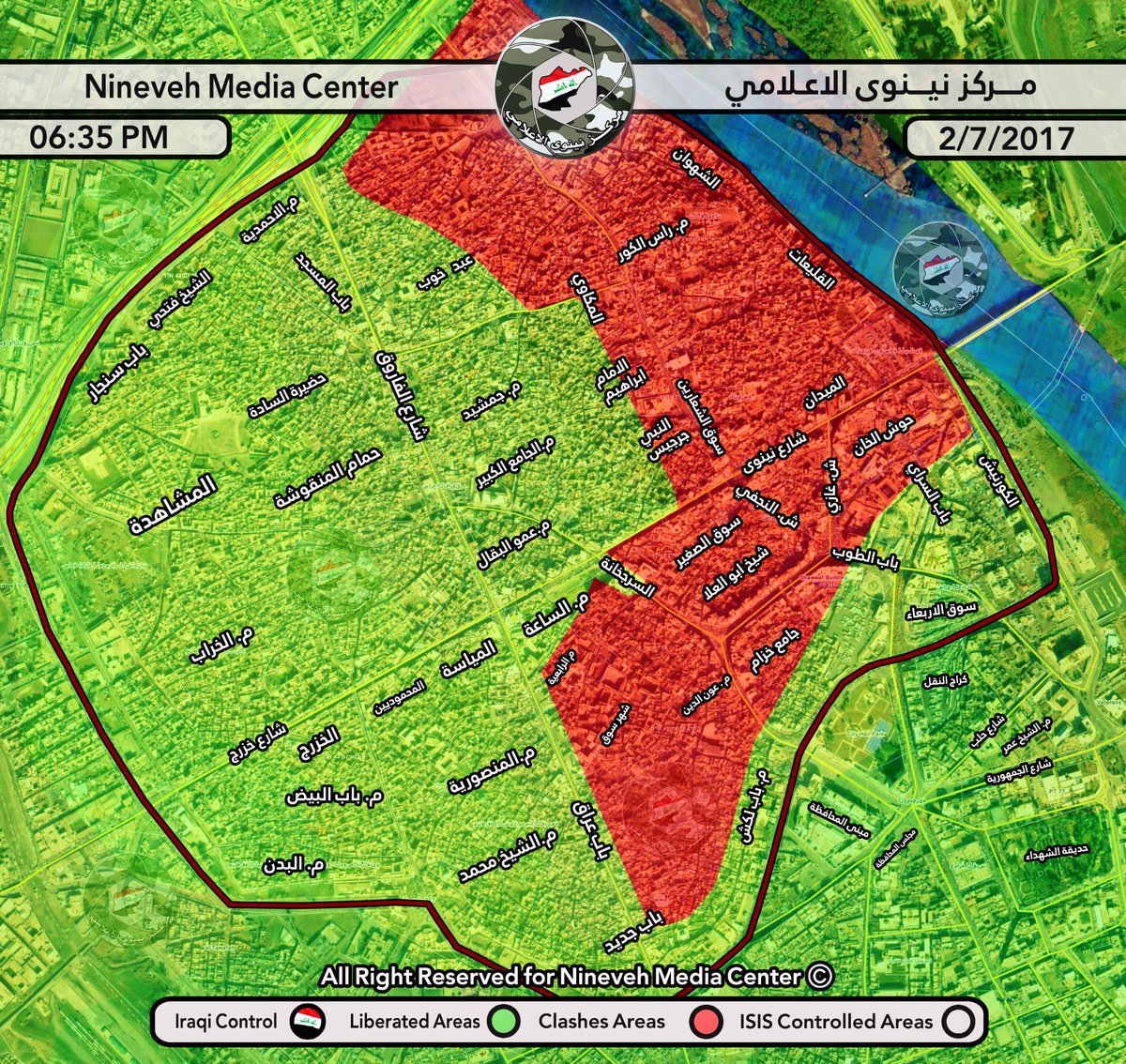 Islamic State’s suicide bomber detonated himself at a checkpoint near a camp for internally displaced persons in Kilo 60 area, west of Al-Ramadi. Iraqi sources reported that 14 people were killed, including four children, and 19 more people wounded, at least four elements of Iraqi security forces were also killed. Amaq Agency’s casualty numbers are 12 dead and 15 wounded Iraqi soldiers as one of their fighters targeted Army’s gathering in the area.

On the 1st of July 2017 CJTF-OIR has conducted 17 strikes in Syria. CJTF-OIR‘s main focus in Syria at the moment is Raqqa region where they did nine strikes supporting SDF‘s operations against IS destroying seven fighting positions, a tactical vehicle, a front-end loader, a mortar system and a heavy machine gun.