Hello and welcome to the 139th installment of the SWD.

Syrian Democratic Forces clashed with Islamic State in Al-Dariyah, Yarmouk and Hittin districts, city of Raqqa. SDF recaptured areas in Al-Seen district that IS captured yesterday. IS’ attack on Al-Qadisiyah district was repelled by SDF. Amaq Agency’s statement reported death of 11 SDF‘s fighters due to IS’ snipers targeting them in Romaniah and Al-Qadisiyah districts.

Syrian Arab Army started entering some of the localities inside of IS’ pocket east of Khanaser. Since there is almost no IS’ presence in the area, SAA is expected to be in full control of the pocket, in several days. 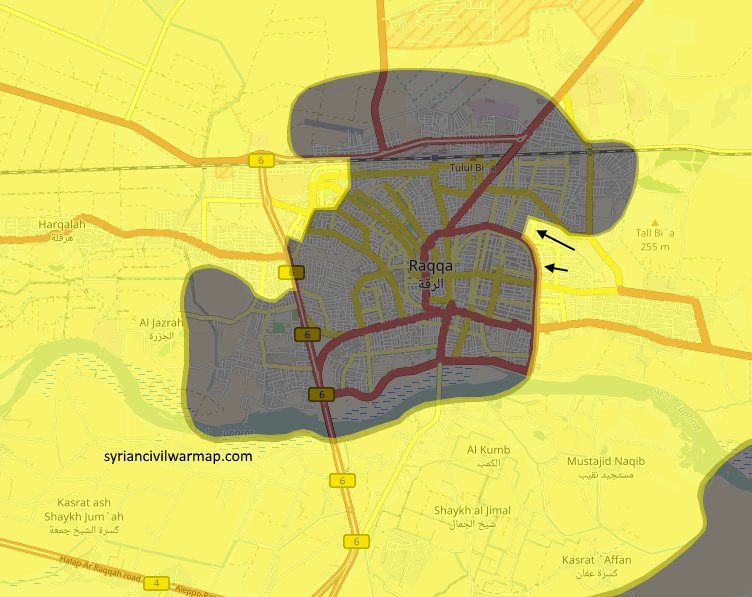 City of Idlib was targeted by another explosion today, which targeted the area near the municipal stadium. Casualties from the attack are reported at four wounded children. West of Idlib, in Al-Sheikh Yusuf village, another explosive device exploded, targeting a bus. Three civilians were reported as killed and seven as wounded from the explosion.

SAA allegedly made limited advances towards Ain Terma by capturing a territory around 300 meters (328 yards) big. Rebels reported destruction of SAA‘s T-72 and a BMP as the latter tried to advance in Ain Terma valley.

Syrian Arab Army reportedly recaptured the remaining positions rebels took control of, around Madinat al-Baath, a couple of days ago. However, as SAA & allies advanced, once again a projectile fell in Israeli-held Golan Heights. Israeli Air Force hasn’t responded to this incident, yet.

Both the SyAAF and SAA‘s artillery targeted Jaber – Naseeb border crossing between Jordan and Syria, rebel positions were intended targets, but reports suggest that at least one projectile hit Jordanian Customs in Jaber, setting it on fire.

Rebel “Daraa Martyrs Documentation Office” reported death of 110 rebel fighters due to clashes with SAA across Daraa governorate during the month of June.

Iraqi forces took control of the northern part of Al-Shafaa district, Ibn Sina hospital was captured in the district. In the Old Mosul district, Iraqi forces captured Al-Arbaa market’s area. Heavy clashes continue in several areas of the Old Mosul district, Amaq Agency claimed death of 39 Iraqi troops and injury of 18 due to clashes in Al-Kurnish street and Bab al-Toub neighborhood. In those same areas, Islamic State reportedly destroyed a BMP and damaged two bulldozers and a Humvee, belonging to the Iraqi Federal Police.

Latest situation in Old Mosul, according to the Iraq Joint Operations.

On the 30th of June 2017 CJTF-OIR has conducted 22 strikes in Syria. CJTF-OIR‘s main focus in Syria at the moment is Raqqa region where they did 11 strikes supporting SDF‘s operations against IS engaging 10 IS tactical units, three fighting positions, three vehicles, a tactical vehicle and a mortar system.