Hello and welcome to the 137th installment of the SWD.

Syrian Democratic Forces captured several localities from the Islamic State south of Raqqa, including the village of Qusra Afan. After these advances which resulted in at least four IS’ casualties, SDF has completely besieged the city of Raqqa.

Islamic State’s SVBIED targeted the gathering of SDF‘s fighters in Al-Mashalab district, while in Al-Barazi roundabout’s area, IS claimed to have killed two SDF‘s fighters and wounded three more.

Explosive device exploded on the road in the vicinity of Saraqib, causing no casualties.

Amaq released a statement reporting death of three SAA‘s soldiers and injury of several others due to clashes with Islamic State, east of Arak.

Several civilians were injured by SAA‘s artillery shelling of Douma city, part of the shells fell on the residential areas in the city.

Rebels reportedly infiltrated a building at the outskirts of SAA-held Al-Sijnah district, rebels took control of positions in the building and killed six fighters of IRGC-backed Afghan militia, Liwa al-Fatemiyoun.

Iraqi forces made important advances in the Old Mosul district by capturing the remains of the symbolic Great Mosque of Al-Nuri and its famous leaning minaret, Al-Hadba. Other localities captured during today’s advances in west Mosul include: Mosul Medical College, an orphanage, Dental College, Al-Batul hospital, and the entire Jumhori hospital complex.

Islamic State’s days are numbered in west Mosul, the city is expected to be under the full control of Iraqi forces in a couple of days, unless something unexpected happens.

In east Mosul, Iraqi security forces foiled an IS sleeper cell planning an attack in the city. Five explosive belts were found in Al-Baladiyat district and three IS’ members arrested in Al-Nabi Younis district, locals of Mosul assisted the security forces with information about IS’ members. 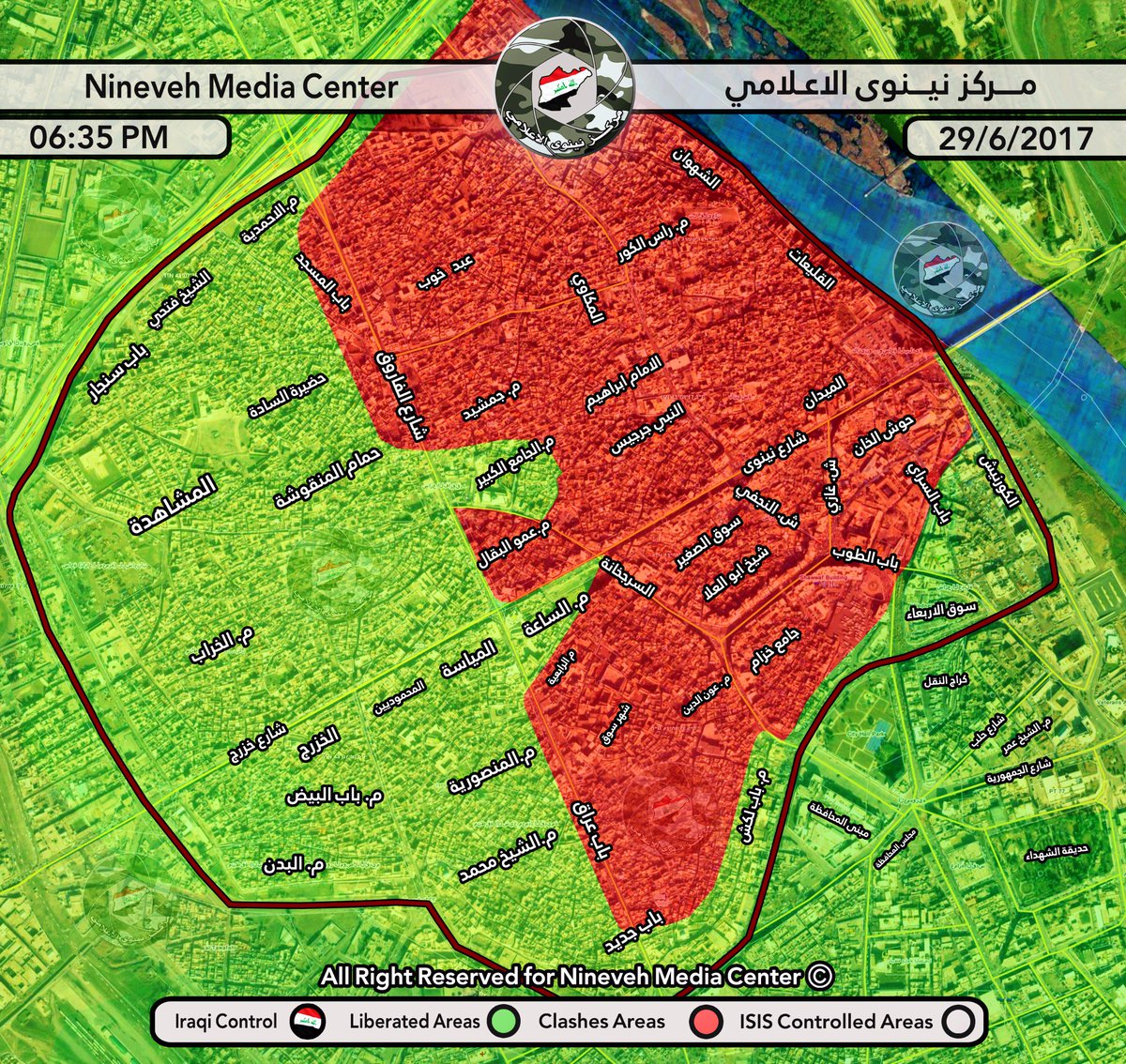 On the 28th of June 2017 CJTF-OIR has conducted 20 strikes in Syria. CJTF-OIR‘s main focus in Syria at the moment is Raqqa region where they did 13 strikes supporting SDF‘s operations against IS destroying 10 fighting positions, two vehicles, a UAS, and suppressing an IS tactical unit.