Hello and welcome to the 121st installment of the SWD.

Syrian Democratic Forces launched a second incursion attempt into rebel-held Darat Izza, rebels repelled the previous attempt which was on the 9th of June. Both sides took a harder stance regarding today’s clashes as the casualty numbers are being reported around 30 for either side. One of the founders of Jabhat al-Nusra’s Azaz branch, Abu Ali al-Atri, was killed in today’s clashes with Syrian Democratic Forces.

Islamic State reportedly destroyed SAA‘s tank with an anti-tank guided missile in the village of Al-Nawafiyah, south of Maskanah.

Syrian Democratic Forces and Islamic State continue to clash across the city of Raqqa with neither side being able to make significant progress against its counterpart. Al-Sinaa district, in the eastern Raqqa city, is disputed between IS and SDF, the latter reportedly controls most of the district. In the western Raqqa city, clashes are still ongoing in Industrial and Hittin districts. According to Amaq, nine SDF‘s fighters were killed by IS’ snipers in Romaniah district and Al-Jizra area.

Syrian Arab Army’s Tiger Forces advanced against IS, southeast of Maskanah in western Raqqa countryside. SAA captured a lot of open ground, including the localities: Rajm Askar, Bir Inbaj, Jub Abd Aziz, Al-Rusafa, Jub Abu Susa and Jub Ghanam. Around Bir Inbaj, SAA reached the road between Raqqa and Ithriya, next wave of advances could occur to the west, which will result in a big IS’ pocket east of Khanaser. 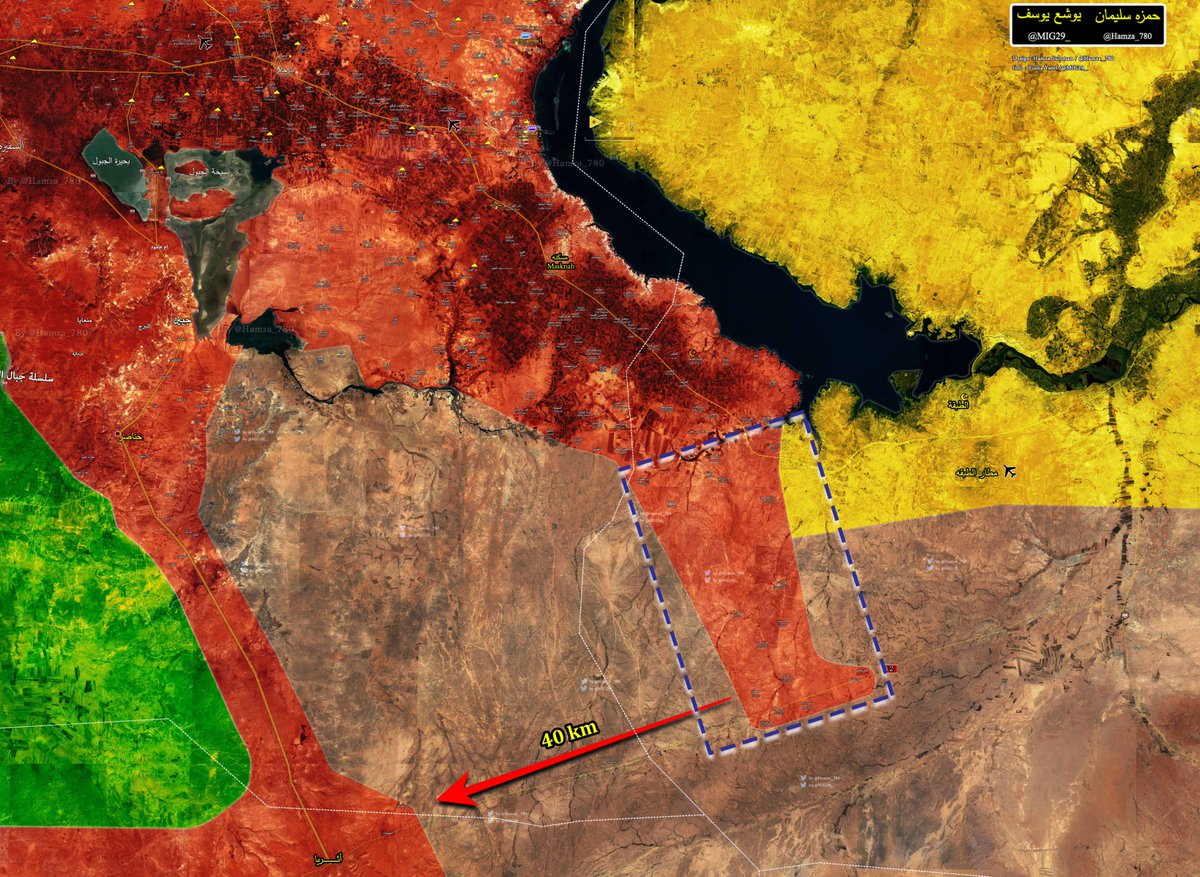 According to several pro-government sources, Syrian Arab Army backed by allies, captured the village of Arak and surrounding gas/oil fields from Islamic State.

Syrian Arab Army reportedly controls half of “Palestinian Camp” district in Daraa, the usual, mutual shelling between SAA and rebels occurred, as well as Syrian and Russian airstrikes.

Two civilians were killed by an improvised explosive device on the road between Dael and Sheikh Saad.

Several pro-Iraq sources claimed Iraqi forces took full control of Bab Sinjar district, north of Old Mosul. This capture isn’t yet confirmed by Iraq Joint Operations, so it should be taken with a grain of salt, at least for now.

Iraqi troops advancing east of Tal Afar were targeted by IS’ SVBIED, explosion occurred at the outskirts of Al-Mawali village and reportedly destroyed a Humvee. The village of Al-Mawali was captured by Iraqi forces yesterday. 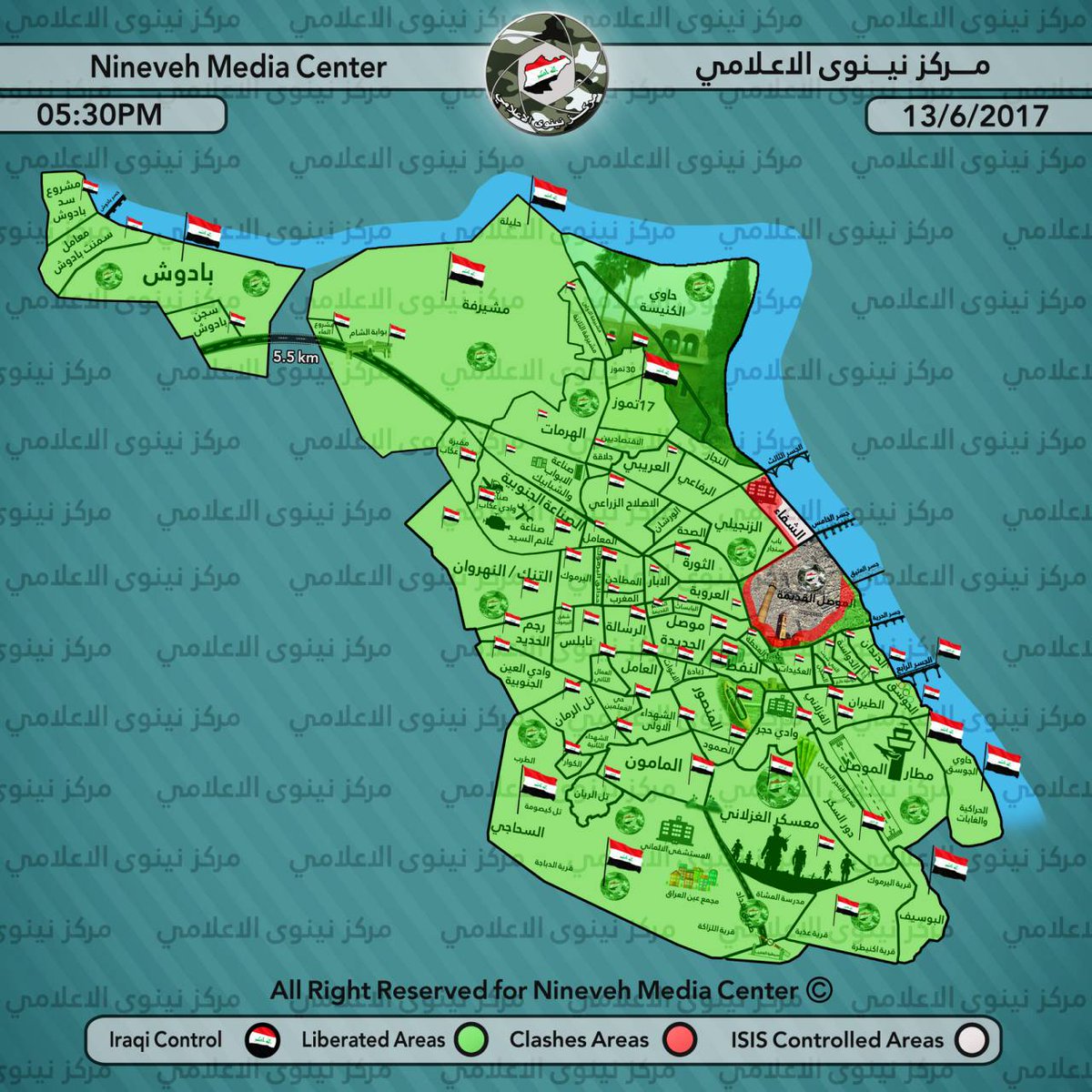 Iraqi security forces conducted several raid, search and clearing operations east of Tikrit against Islamic State. Operations covered the area from Tal Kusaybah to Al-Fursan and the results will be released soon.

On the 12th of June 2017 CJTF-OIR has conducted 29 strikes in Syria. CJTF-OIR‘s main focus in Syria at the moment is Tabqa-Raqqa-Deir al-Zour region where they did 29 strikes supporting SDF‘s operations against IS destroying five IS oil tanks, three IS well heads, a tactical vehicle, an IS tank, 21 fighting positions and four vehicles.

Amaq claimed that eight US’ soldiers were killed by a suicide attack near the US embassy in Wazir Akbar Khan neighborhood, Kabul.