Hello and welcome to the 113th installment of the SWD.

Another wave of Syrian Arab Army’s advances took place south of Maskanah. SAA captured Rasm Falah, Al-Jawim, and Mushirfa Kabira. The village of Al-Jawim is administratively part of Raqqa governorate, meaning that SAA now has, even though limited, presence in the governorate.

According to Amaq’s statement, IS’ destroyed SAA‘s tank with an anti-tank guided missile in the village of Muftahih, south of Maskanah. 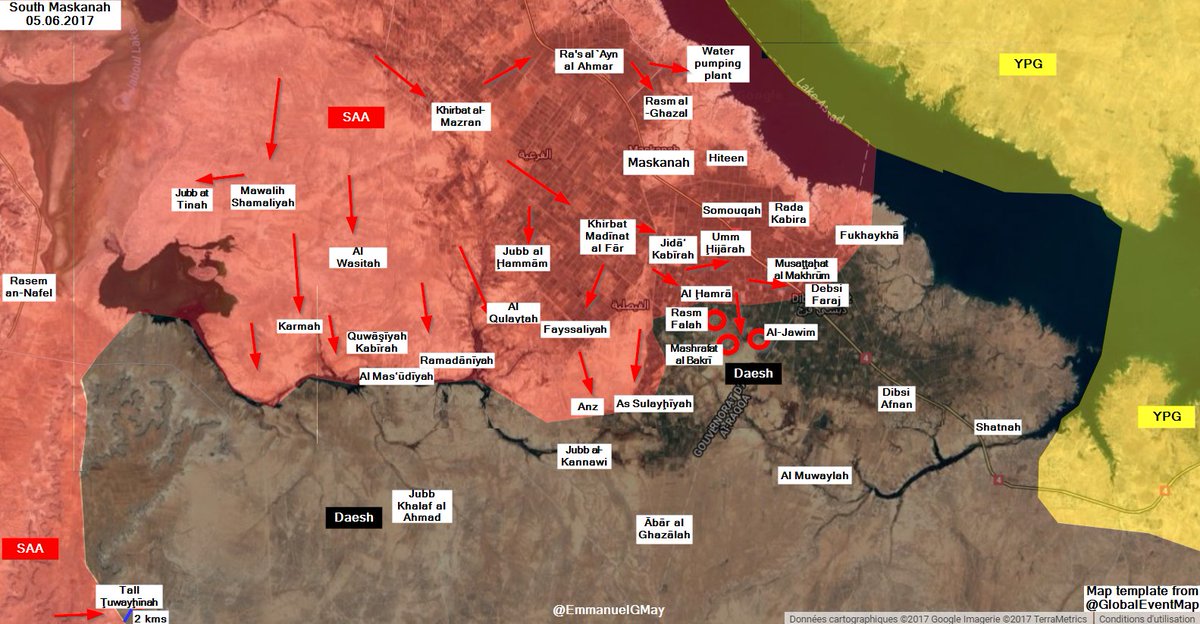 Syrian Democratic Forces cleaned half of the IS’ pocket created yesterday northwest of Raqqa. SDF captured Rabia, Al-Adnaniyah, Al-Sakoura, and Bir al-Hashim, while the clashes with IS are still ongoing in Hawi Hawi, Yaarub, and Abu Sous. In the battles for the pocket, IS reportedly lost 36 fighters.

Syrian Arab Army launched an offensive against Islamic State in Hama governorate, east of Al-Salamiyah. SAA advanced around Aqarib and captured eight checkpoints, on the second axis, south of Sheikh Hilal village, SAA captured Rasm al-Tinah. SAA lost a tank as it advanced southeast of Sheikh Hilal, the tank was destroyed by an anti-tank guided missile. Amaq’s statement reported death of three SAA‘s soldiers due to clashes with IS in the village of Umm al-Balaya, east of Al-Salamiyah.

Islamic State launched another attack on SAA‘s position in Wadi al-Adhib area, the attack caused the closure of Al-Salamiyah – Ithriya road. SAA eventually repelled the attack and subsequently reopened the road. IS’ attack included shelling of Ithriya as well as destruction of two SAA‘s “rocket launchers”.

Islamic State destroyed a BMP and damaged a tank belonging to SAA during the encounter between the two parties north of Palmyra silos.

Situation is still a bit unclear in Deir al-Zour, pro-government sources reported that Islamic State, after all did capture the driving school. The same sources continue to dispute Islamic State’s capture of Panorama roundabout, which means that the area should be considered as contested with clashes still ongoing.

Syrian Arab Air Force’s MiG-23 crashed in desertous Al-Dakwa area, east of Damascus. Free Syrian Army group, Jaysh Usud al-Sharqiya claimed to have downed the MiG-23 and found pilot of the warplane dead. It is unclear at the moment if rebels actually downed the warplane or if it crashed due to technical failure.

Technical failure seems like a more likely explanation, since Syrian MiG-23 warplanes are quite outdated and used very frequently with little maintenance. Even though the rebels in the southeastern desertous Syrian territory are military backed by the Western powers, their main role is to fight against Islamic State, which means that the delivery of advanced anti-air weapons isn’t in the equation because IS’ doesn’t have an air force.

According to several sources, Syrian Arab Army launched an attack on Daraa camp and captured some areas inside of it.

Islamic State’s affiliate, Jaysh Khalid ibn al-Walid claimed death of 13 rebel fighters and injury of another 14 as the two clashed at the outskirts of Jallin.

Islamic State is being accused of using chemical agent chlorine against the Iraqi forces and potentially civilians in Al-Zanjili and Al-Saha districts, west Mosul.

Islamic State’s improvised explosive device reportedly destroyed a vehicle carrying Peshmerga soldiers near the Zarka bridge, west of Tuz Khurmatu. The other IS’ act in the governorate includes IS’ sniper killing two Al-Hashd al-Shaabi’s fighters in the villages of Al-Kahf and Al-Khanouka, around Al-Shirqat.

Islamic State’s suicide bomber detonated himself at a checkpoint in Balad Ruz. Casualties were reported from the explosion, but their number is unknown for now.

On the 4th of June 2017 CJTF-OIR has conducted 20 strikes in Syria. CJTF-OIR‘s main focus in Syria at the moment is Tabqa-Raqqa-Deir al-Zour region where they did 17 strikes supporting SDF‘s operations against IS destroying 90 IS oil barrels, 10 IS oil refinery stills, 10 vehicles, four IS oil separation tanks, three IS well heads, and four fighting positions.

Other areas where three strikes occurred are Abu Kamal (Al-Bukamal) and Al-Tanf destroying an IS well head, an IS oil manifold, two tactical vehicles and two IS vehicles. Full report on CJTF-OIR strikes conducted in both Syria & Iraq can be found here.