Hello and welcome to the 111th installment of the SWD.

On the Khanaser front, SAA captured northeastern and central parts of the Jabal Tuwayhinah mountain range from Islamic State. According to Amaq’s statement, IS’ fighters organized themselves on Khanaser front and repelled SAA‘s attack on Al-Hamam village. During the failed SAA‘s attack, IS reportedly killed 18 soldiers and wounded another 10.

Situation in eastern Aleppo governorate, HD version of this map can be found here.

Syrian Democratic Forces captured Al-Mansourah, southwest of Baath dam from Islamic State. Clashes were very intense in Al-Mansourah during which SDF destroyed one SVBIED and seized a VBIED, weapons, ammo, and at least five tanks.

Clashes are still ongoing in Hunaydah west of Al-Mansourah between SDF and IS, several sources reported Hunaydah as captured by SDF, but the capture should be treated as unconfirmed for now. 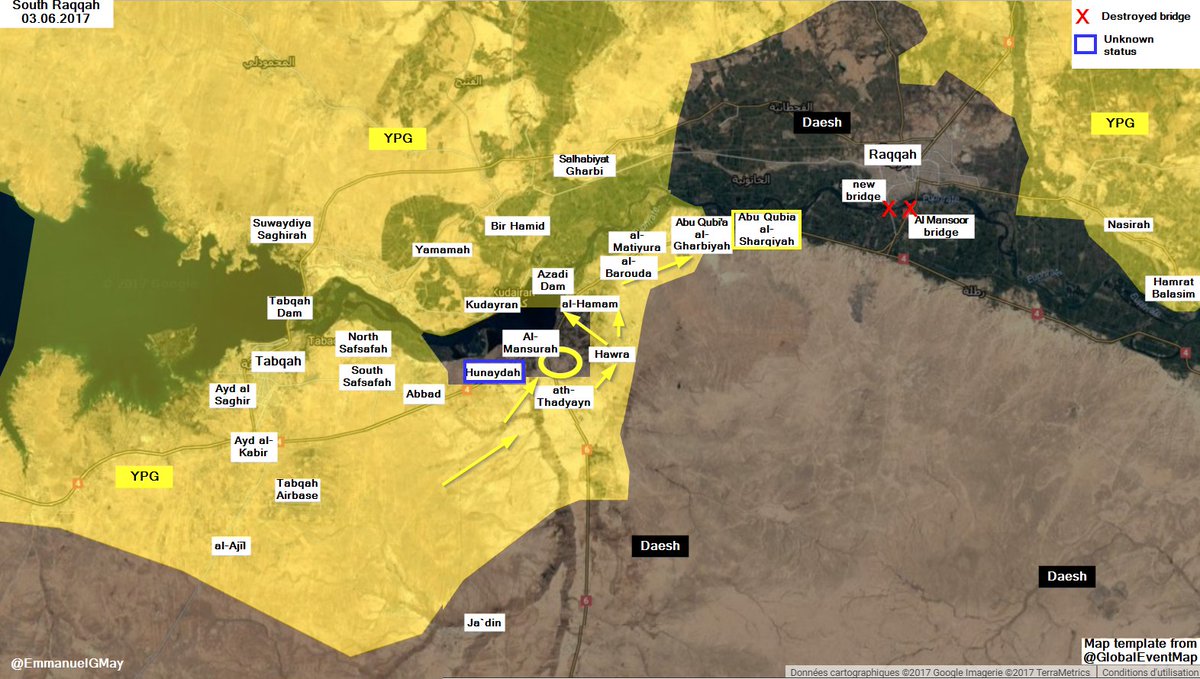 Tensions continue to rise between Hayat Tahrir al-Sham and Ahrar al-Sham in Idlib governorate, the latter arrested one of the former’s fighters in Kafr Nabl, which resulted in HTS encircling the court in charge of the aforementioned locality.

Improvise explosive device exploded near the Sharia Court in Al-Dana, no casualties were reported from the explosion.

Katibat al-Shahid Muhammad Asad Badr, which is led by Abu Omar al-Omar and operates in Saraqib, defected from Hayat Tahrir al-Sham and joined Ahrar al-Sham. Ahrar al-Sham’s statement regarding the defection can be found here.

Heavy clashes are still ongoing in Al-Ash’ari, as the Hayat Tahrir al-Sham backed by Faylaq al-Rahman is trying to advance in the area against Jaysh al-Islam.

Arbin Court, in Arbin, suspended their activities due to Faylaq al-Rahman’s attack on the “Directorate of the Arbin area” and its elements. Court’s statement can be found here.

Rebel “Daraa Martyrs Documentation Office” reported 10 rebel casualties from clashes with SAA in Al-Manashiyah district. Out of those 10 killed fighters, six belonged to various Free Syrian Army factions while the remaining four were a part of Hayat Tahrir al-Sham.

Unconfirmed reports from pro-rebel sources suggest that IRGC-backed Afghan milita, Liwa al-Fatemiyoun withdrew from the Al-Manashiyah district. The reasons for the withdrawal are supposed high casualty numbers and disagreement with other pro-government groups.

Three Islamic State’s inghimasi (suicide fighters) stormed the HQ of Al-Hashd al-Shaabi in Al-Halabisa village, west of Baghdad. According to Amaq’s statement, IS’ inghimasi entered the HQ and then detonated themselves.

On the 2nd of June 2017 CJTF-OIR has conducted 17 strikes in Syria. CJTF-OIR‘s main focus in Syria at the moment is Tabqa-Raqqa-Deir al-Zour region where they did 15 strikes supporting SDF‘s operations against IS destroying 25 IS oil barrels, four IS oil stills, four IS well heads, two IS oil trucks, 12 vehicles, five fighting positions, four tactical vehicles, two VBIEDs, and an ammunition cache.

Other area where two strikes occurred is Abu Kamal (Al-Bukamal) destroying nine IS oil tanks and seven IS oil stills. Full report on CJTF-OIR strikes conducted in both Syria & Iraq can be found here.