Hello and welcome to the 107th installment of the SWD.

Syrian Democratic Forces captured Al-Assidiyah from Islamic State north of Raqqa, after the capture of Al-Assidiyah clashes between SDF and IS erupted south of it around the 17th Division military base.

SDF also advanced on another front, east of Tabqa they captured villages of Al-Barouda, Al-Matiyura and Hawra. Aim of these advances is to besiege Islamic State fighters located in and around Baath Dam. 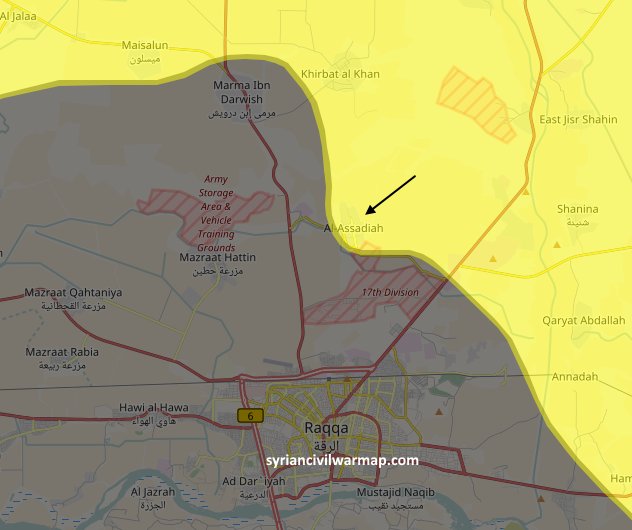 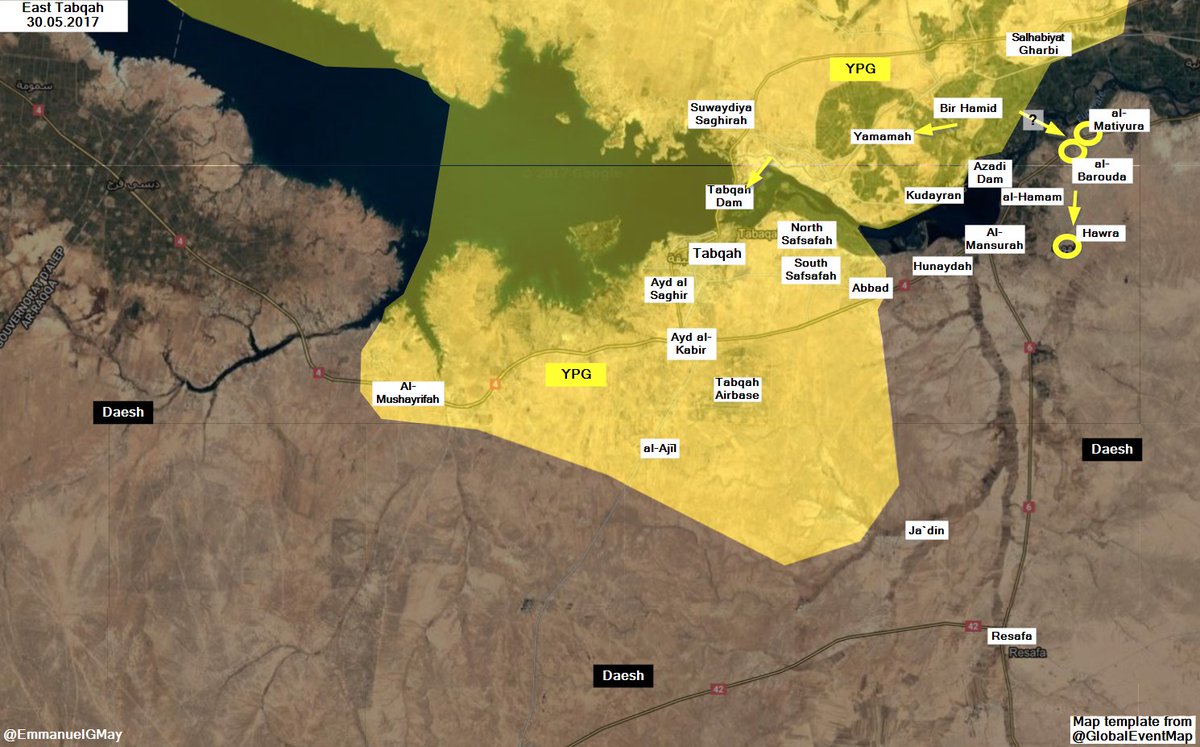 Prisoners took control of Hayat Tahrir al-Sham’s prison in Abu al-Duhur, eastern Idlib governorate. Prisoners reportedly seized guard’s weapon, threatened to kill him and made him open the cells, thus releasing all prisoners. Number of prisoners escaped varies between 35 and 50, depending on the source.

However, a different story surfaced regarding the events related to the prison break. This story says that a number of Iraqi fighters taken as prisoners managed to overcome the guards and imprison them. After that, the prisoners met up with Syrian Army’s Special Forces in rebel-held territory in Idlib which extracted them to safety.

Among those released individuals from Faylaq al-Sham is one of its commanders, Muhammad Abdul Karim al-Daghim, he was captured in 2016 during the battles for Aleppo.

Commander in Liwa Omar, part of Ahrar al-Sham, Sheikh Nasser Hamadeh wounded on the 28th of May by unknown gunmen in Kafr Batikh died due to his wounds in Bab al-Hawa hospital.

Situation in greater Damascus area after rebels evacuated Barzeh, HD version of this map can be found here.

Islamic State reportedly launched a counterattack in Al-Zanjili district of west Mosul, during the supposed the attack IS fighters damaged a bulldozer and captured three Iraqi Army’s positions in the district. Today’s clashes between IS and Iraqi forces focused mainly on Al-Saha district, IS’ SVBIED exploded in it and IS claimed to have destroyed Iraqi forces’ military vehicle as well as looted a bulldozer.

In clashes at the outskirts of Bab Jadid neighborhood in Old Mosul district, Islamic State claimed to have killed eight Iraqi soldiers, including two officers.

Islamic State’s Amaq Agency released several statements regarding the events that occurred west of Mosul, in territory newly captured by Al-Hashd al-Shaabi (Popular Mobilization Units). In the village of Al-Khadra, IS’ improvised explosive devices reportedly killed and wounded 13 Iraqi fighters. Other two Amaq’s statements are related to Al-Jayir village, Iraqi forces’ convoy allegedly entered into a minefield near the village which resulted in nine casualties. The remaining claim from Al-Jayir includes IS destroying a Humvee with an anti-tank guided missile. 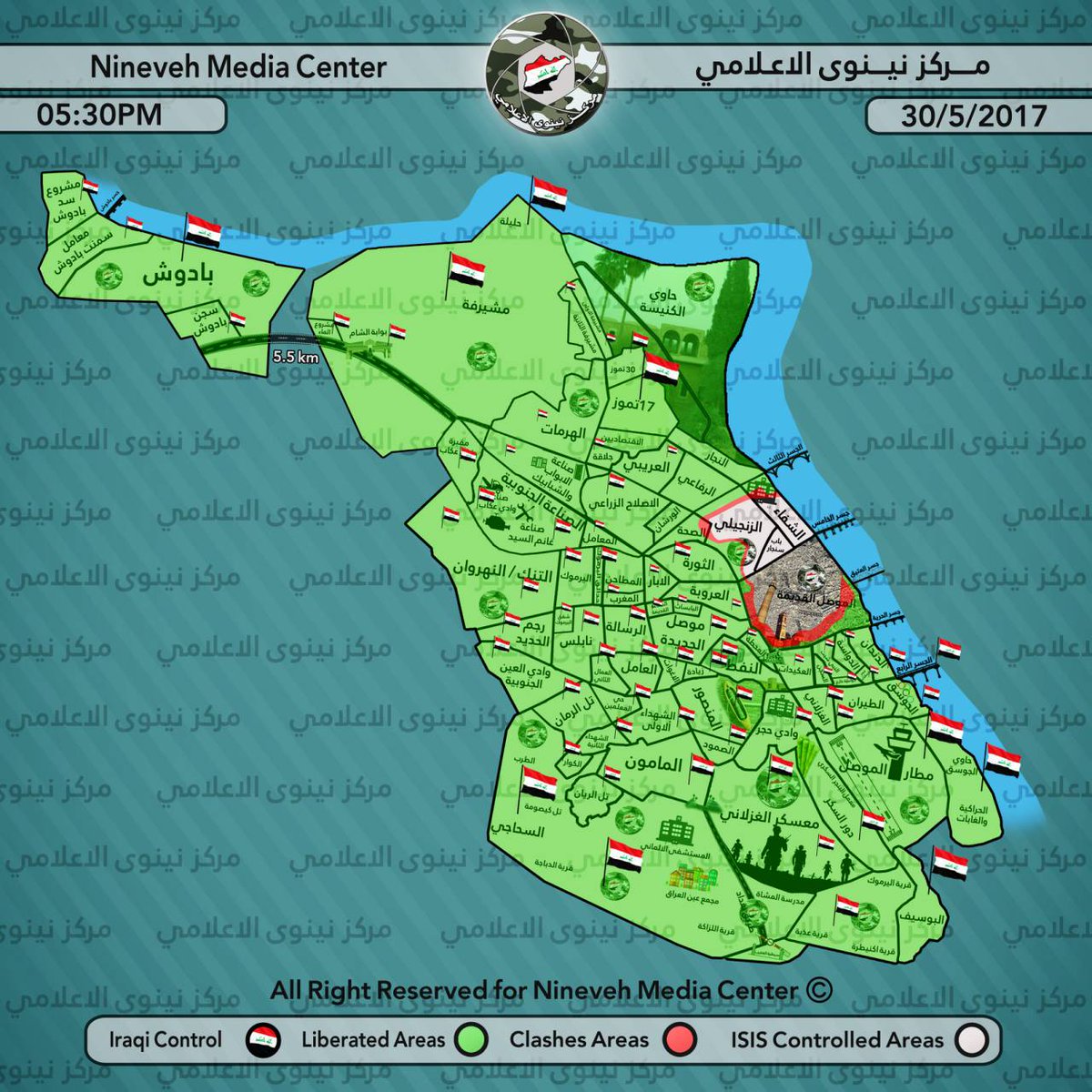 On the 29th of May 2017 CJTF-OIR has conducted 18 strikes in Syria. CJTF-OIR‘s main focus in Syria at the moment is Tabqa-Raqqa-Deir al-Zour region where they did 18 strikes supporting SDF‘s operations against IS destroying four IS well heads, an IS oil storage tank, an IS oil tanker truck, six vehicles, a tunnel, a mortar system, a weapons cache, a VBIED factory, three fighting positions, an IS oil separator tank and an IS headquarters.