Hello and welcome to the 101st installment of the SWD.

Several pro-government sources reported the death of Islamic State’s “Minister of War” Abu Musab al-Masri during the SAA‘s operation in eastern Aleppo, info was later picked up by a couple of mainstream media outlets. The claim about Abu Musab being IS’ “Minister of War” is incorrect, as the position is currently officially vacant due to fears of the selected individual being targeted by CJTF-OIR, but Tajik national Gulmurod Khalimov has been unofficially appointed as the minister.

Clashes between Jabhat al-Shamiya and Faylaq al-Sham have spread to Azaz as fighting is raging over the southern neighborhoods of Azaz. Operation is reportedly aimed at removing Hayat Tahrir al-Sham’s influence in northern Aleppo, the reason Faylaq al-Sham is getting targeted has already been stated. Members of Nour al-Din al-Zenki, part of Hayaat Tahrir al-Sham, have formed Liwa Fursan al-Thawra in northern Aleppo and then joined Faylaq al-Sham. Clashes have also been reported in Al-Bab between the aforementioned groups.

Islamic State launched a night raid on three SAA‘s checkpoints on Ithriya – Khanaser road. According to Amaq’s statement, 11 soldiers belonging to SAA were killed and one vehicle destroyed. Pro-government sources reported attack was repelled, but SAA lost four soldiers according to them.

Syrian Democratic Forces captured Hamrat Nasir after more than three days of clashing with Islamic State in and around it. Another locality captured today by SDF is Hamrat Balasim, southeast of Hamrat Nasir. Islamic State’s attack on Baran village was repelled with SDF reportedly destroying seven SVBIEDs.

Amag Agency released a new video showing four captured SDF soldiers, they were captured in the village of Eajil near Tabqa Air Base. 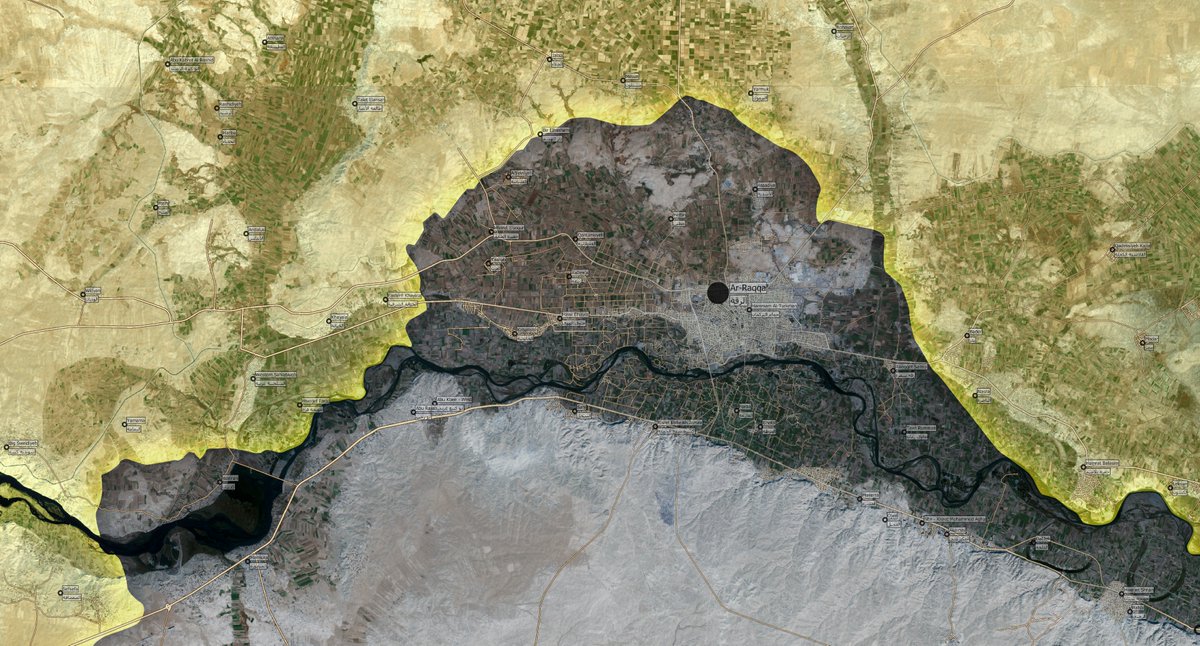 Situation around Raqqa, HD version of this map can be found here. Source: Nathan Ruser

South of Palmyra, Syrian Arab Army captured Tell al-Farri and missile battalion as well as Bir Qasr al-Hallabat south of which SAA already advanced on the 19th of May. After these advances, SAA units south of Palmyra are a step closer to linking up with those advancing east of Al-Qaryatayn. If those two fronts were to link up, a sizeable Islamic State’s pocket of mountains would be created.

Situation east of Al-Qayratayn and south of Palmyra, keep in mind that the map does not show rebel-held localities in the area. Source: loomis

Several sources, mainly pro-rebel reported about a large Islamic State attack against SAA in Deir al-Zour. According to the reports, Islamic State advanced in Huwayqa al-Gharbi capturing Jawrah bridge, Naqshabandi, Anas ibn Malik mosque and Kasar district. IS’ advances should be taken with a grain of salt until confirmed by official channels and/or its media outlet, Amaq Agency.

Rebels’ operations room Al-Bunyan al-Marsous reportedly advanced in the northern edges of Al-Manashiyah after failed SAA‘s attack on the 22nd of May. Rebels captured around 40 buildings in northeastern Al-Manashiyah district.

Based on a number of Amaq Agency’s statements coming from west Mosul, Islamic State had a “successful” day in the area, fending off several attacks and actually recapturing some ground from the Iraqi forces.

Deputy Chairman of Popular Mobilization Committee Abu Mahdi al-Muhandis officially launched the second phase of operations west of Mosul in Nineveh desert. Aim of the second phase is to capture IS’ stronghold of Baaj and secure the northern part of the border between Syria and Iraq. Even though the start of the second phase was announced during the night, Al-Hashd al-Shaabi have already started to heavily shell IS-held localities and stormed the village of Al-Qahtaniya. 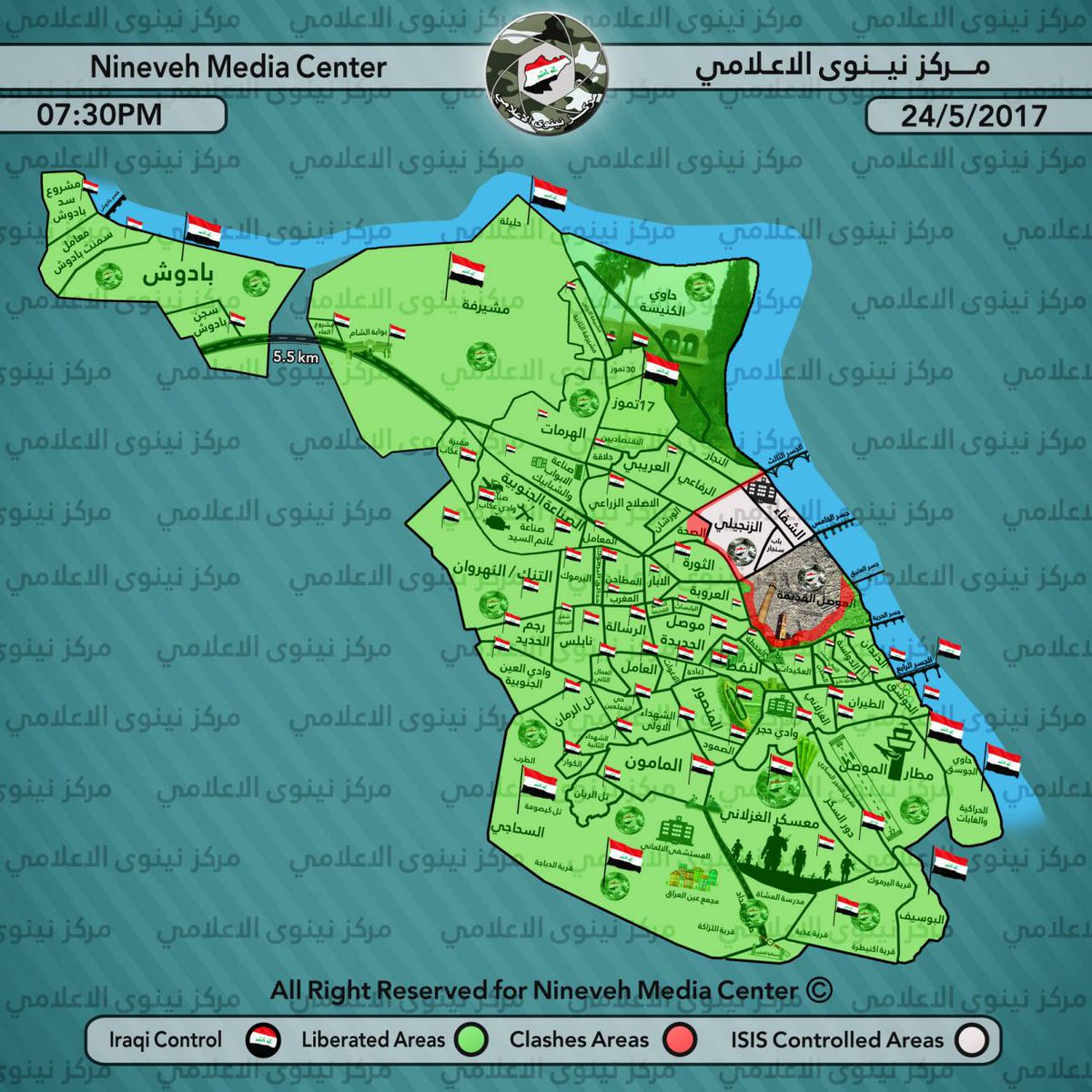 On the 23rd of May 2017 CJTF-OIR has conducted five strikes in Syria. CJTF-OIR‘s main focus in Syria at the moment is Tabqa-Raqqa-Deir al-Zour region where they did four strikes supporting SDF‘s operation against IS destroying eight IS oil, two IS oil trucks, three fighting
positions and a mortar system.

Other area where one strike occurred is Abu Kamal damaging a vehicle. Full report on CJTF-OIR strikes conducted in both Syria & Iraq can be found here.