Hello and welcome to the 83rd installment of the SWD.

It is the fifth day of clashes between SDF and remaining IS elements in districts north of Tabqa, districts were heavily targeted by CJTF-OIR‘s airstrikes and artillery.

SDF repelled IS’ attack west of Tabqa on Al-Mushayrifah village, CJTF-OIR played an important role targeting IS positions as they were preparing to attack killing at least six of them.

According to Amaq Agency’s statement 20 SDF fighters were killed, 10 more wounded and four vehicles destroyed when an IS SVBIED targeted area west of Al-Hazima, north of Raqqa.

Faylaq al-Sham’s commander in Aleppo “sector” Joumaa al-Salim was killed in Jarjanaz, southeast of Idlib while trying to solve a dispute between two unknown parties.

Syrian Arab Army backed by National Defense Forces launched three attacks in 24 hours on Al-Zilaqiat north of Halfaya and were successful in capturing the village and a hill near it in their third attempt. However, rebels quickly regrouped and launched a counterattack on the territory lost regaining it once again according to pro-rebel sources and reportedly capturing a tank, as always ATGMs played a role in rebels’ counterattack.

Rebels’ capture of Al-Zilaqiat is being disputed by pro-government sources so it should be labeled as unconfirmed for now.

Amaq Agency reported that 10 SAA soldiers were killed south of Deir al-Zour in clashes with IS.

SAA reportedly captured a dozen of buildings around Industrial Institute in Qaboun pocket.

On the other hand Faylaq al-Rahman arrested several members of committees in Arbeen and Zamalka including Sheikh Hamed Suqarq Chairman of the Committee for the Support of the Oppressed in the Eastern Ghouta.

Iraqi Army continues to clash with IS in northwestern Mosul, due to latter’s resistance in the area Army managed only managed to make small advances today. According to a number of Amaq Agency’s statements released today Islamic State inflicted heavy loses to Iraqi Army in west Mosul. In Mushrifa area IS’ SVBIED detonated near Army’s gathering reportedly destroying a tank and inflicting a dozen of casualties, also in Mushrifa five soldiers were killed by IS snipers and another six killed or wounded by an RPG. The last claim from Mushrifa includes IS damaging M1 Abrams tank and a Humvee.

IS was also active in Al-Haramat district today destroying a bulldozer with an RPG as well as damaging two BMPs and another bulldozer in the same attack.

West of Al-Hadhar which was recently captured by Al-Hashd al-Shaabi (Popular Mobilization Units) IS destroyed a BMP with an ATGM. 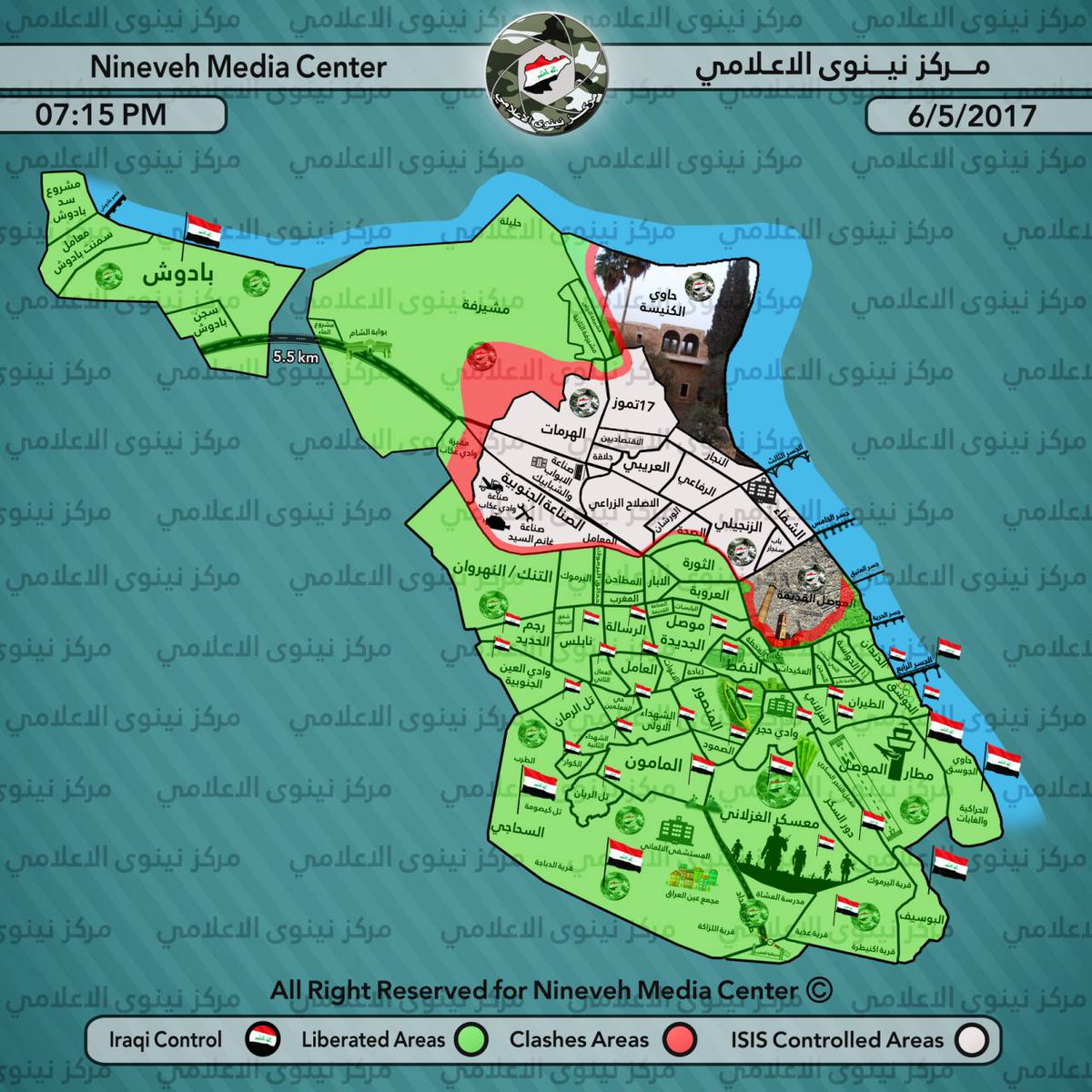 IS destroyed Iraqi Army’s tank with an ATGM near Sheikh Ali village north of Baiji according to Amaq Agency’s statement.

On the 5th of May 2017 CJTF-OIR has conducted 10 strikes in Syria. CJTF-OIR‘s main focus in Syria at the moment is Tabqa-Raqqa-Deir al-Zour region where they did seven strikes supporting SDF‘s operation against IS destroying five IS oil storage tanks, three IS oil distillation tanks, front-end loader, an IS wellhead, two fighting positions and a vehicle.

Other areas where three strikes occurred are Abu Kamal and Palmyra destroying four IS wellheads and engaging an IS tactical unit. Full report on CJTF-OIR strikes conducted in both Syria & Iraq can be found here.