Hello and welcome to the 81st installment of the SWD. 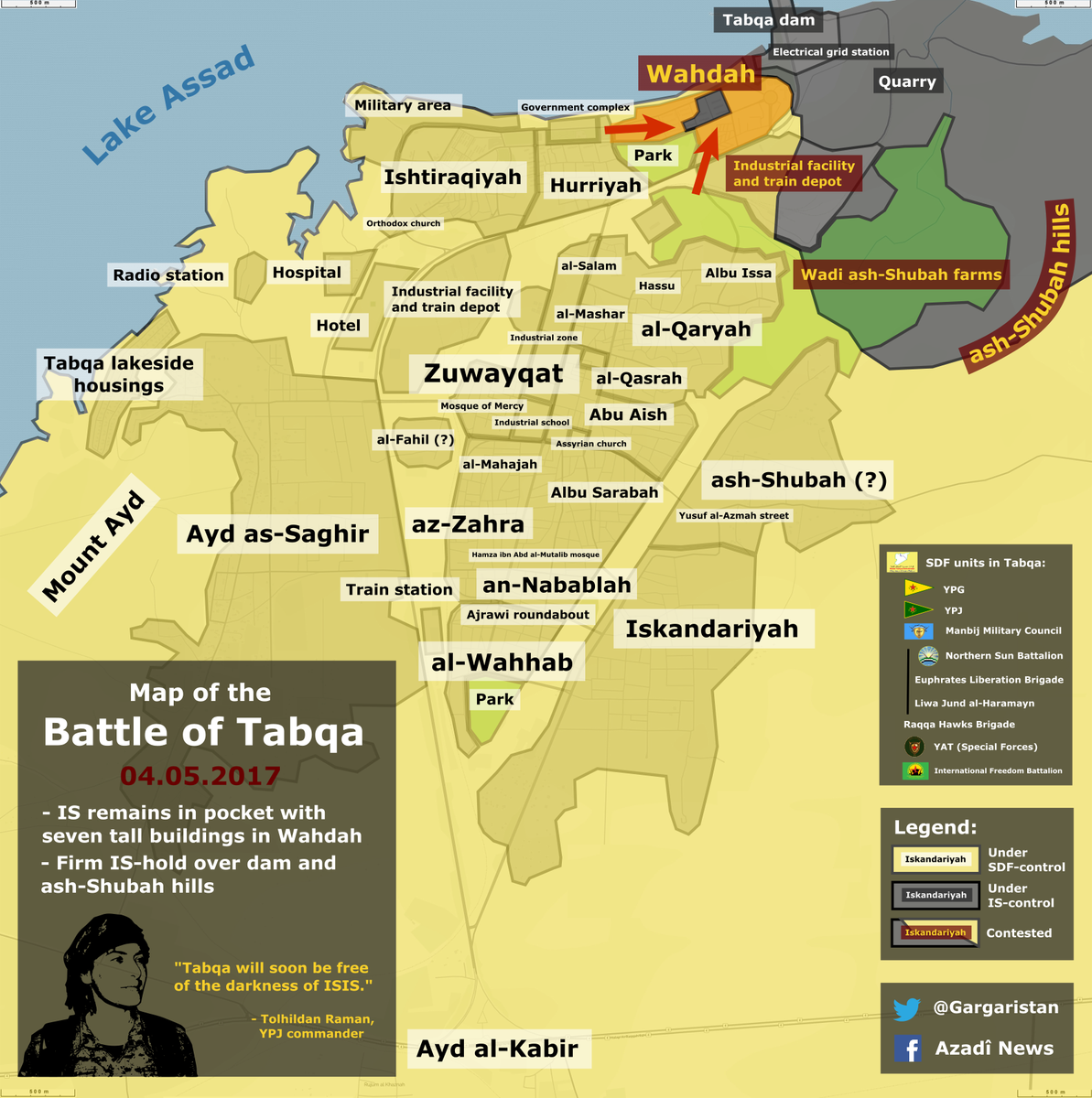 SAA released ghanima (war spoils) from what is claimed as a failed rebel attack on Masasnsah, among the various small arms with ammo seized the most interesting capture was a Konkurs ATGM launcher.

Eight batch of rebels and civilians from Al-Waer neighborhood, Homs are being evacuated towards Jarablus. One more batch is expected to be evacuated and then the neighborhood should be cleared from rebel presence, estimated date is 13th of May.

SAA advanced around Jabal al-Shumariya which was captured yesterday, points captured today are 968, 881 and 876. Several points were also captured by SAA west of Al-Talila area which is east of Palmyra.

Al-Humaymah area which was captured by Maghwar al-Thawra from IS on 30th of April was recaptured by the latter.

Commander of a battalion in Faylaq al-Rahman, Salah al-Ashi (Abu Hassan) was killed in clashes with Jaysh al-Islam. 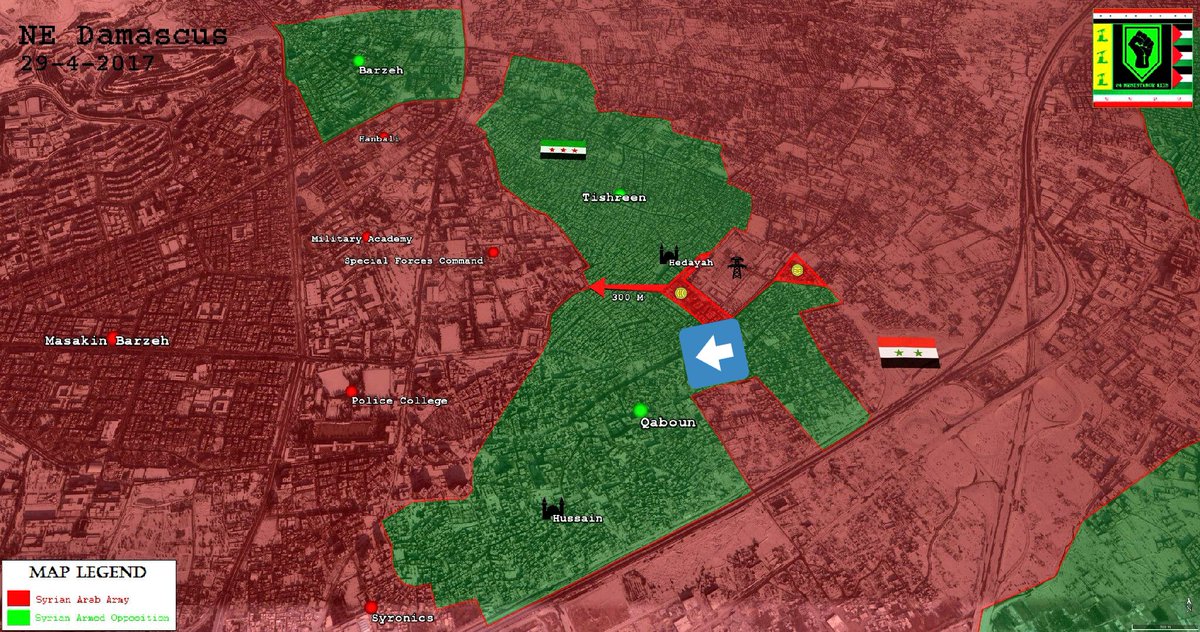 Free Syrian Army recaptured Tell Saad northeast of Al-Suwayda after it was briefly captured by National Defense Forces in an early attack.

Iraqi Army launched today the long awaited operation in northwestern Mosul storming several IS-held neighborhoods. Army’s progress was significant today, in Mushrifa area “second” and “third” districts of it were captured from IS. In Hawi al-Kanisa district Iraqi Army captured St. Michael’s monastery and the 60th street. In Wadi Akab district a cemetery was captured, the last captured localities were at the western entrance to the Mosul, Hassouna village and Nineveh Gas Plant were secured from IS.

However, the captures didn’t go so smoothly for Iraqi Army today as Amaq Agency claimed at least two suicide attacks on Army’s positions in Mushrifa destroying three BMPs, damaging the fourth one and killing six Iraqi soldiers. IS also reportedly destroyed a T-72 and M1 Abrams tanks as well as a Humvee, a Jeep and several other vehicles.

In 17 Tammuz district reports suggest that 20 families were killed due to shelling by Iraqi Special Operations Forces on Al-Walaa school northwest of Mufti Mosque. Families were taking shelter in the school when it was reportedly targeted.

In Tal Afar IS’ expert in “car bombs” Abu Yousef al-Halabi from Aleppo, Syria died along with three other IS figures in a car explosion which occurred at a vehicle borne improvised explosive devices workshop.

Islamic State was dealt another blow in Tal Afar as Um Qays, female official in the group and leader of women’s wing of Al-Hesbah was found dead in an unfinished house located on the outskirts of Tal Afar. Um Qays rose among IS’ ranks in summer of 2015 and has also been in charge of intelligence cells. 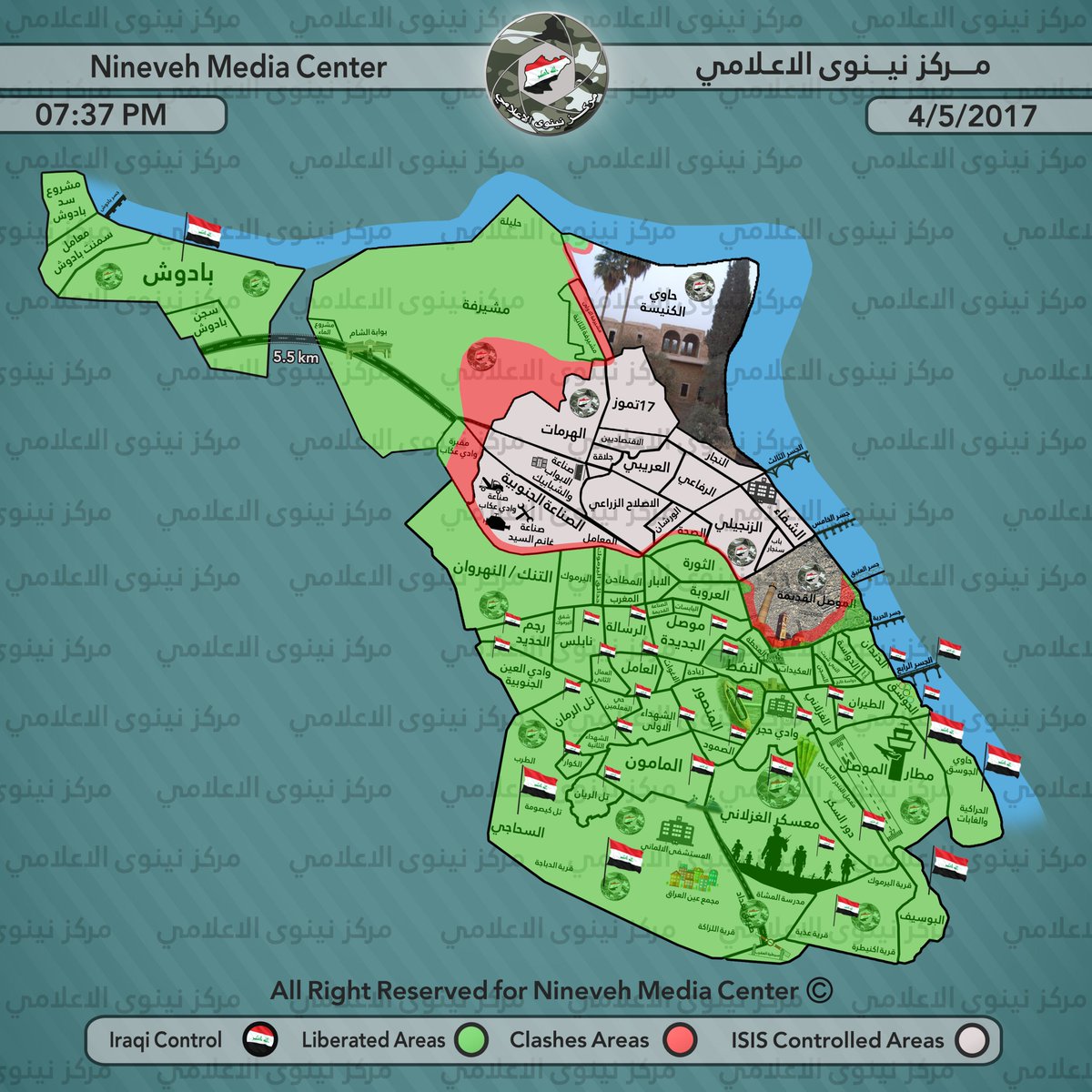 On the 3rd of May 2017 CJTF-OIR has conducted seven strikes in Syria. CJTF-OIR‘s main focus in Syria at the moment is Tabqa-Raqqa-Deir al-Zour region where they did five strikes supporting SDF‘s operation against IS destroying two IS oil separation tanks, an IS wellhead, 12 fighting positions, an IS supply route, and a tactical vehicle; and suppressing an IS tactical unit.

Other areas where two strikes occurred are Abu Kamal and Palmyra destroying two IS oil tanks and a fighting position. Full report on CJTF-OIR strikes conducted in both Syria & Iraq can be found here.