Hello and welcome to the 80th installment of the SWD.

Clashes erupted between SDF and TFSA west of Azaz in Maraanaz and Ayn Daqnah areas, Maraanaz area is interesting in particular since there was footage of Syrian flag flying and both Syrian and Russian troops are allegedly present in the area.

Situation around Azaz. Source: Interactive Rurikmap which can be found here

SDF continues to clash with IS in newly captured districts north of Tabqa, the latter also launched an attack east of Tabqa in Safsafa area. IS Attack on Safsafa has so far resulted in at least 20 IS casualties and a sizeable ghanima (war spoils).

New information surfaced today confirming the death of three fighters from Yekineyen Anti Teror, SDF‘s Anti-Terror Unit. The fighters were killed in Tabqa city during clashes with IS on 21st of April.

Jaysh Idlib al-Hurr (Free Idlib Army) targeted and destroyed with a TOW missile SAA pickup carrying ammo near Jabal Aku in Jabal al-Akrad area. Group also claims to have killed a number of troops, reportedly Iranians but it is impossible to verify.

SAA advanced against IS east of Homs capturing Jabal al-Shumariya mountain range and some surrounding areas including villages of Tadmuriya, Al-Khaliliat and Al-Muhashma. 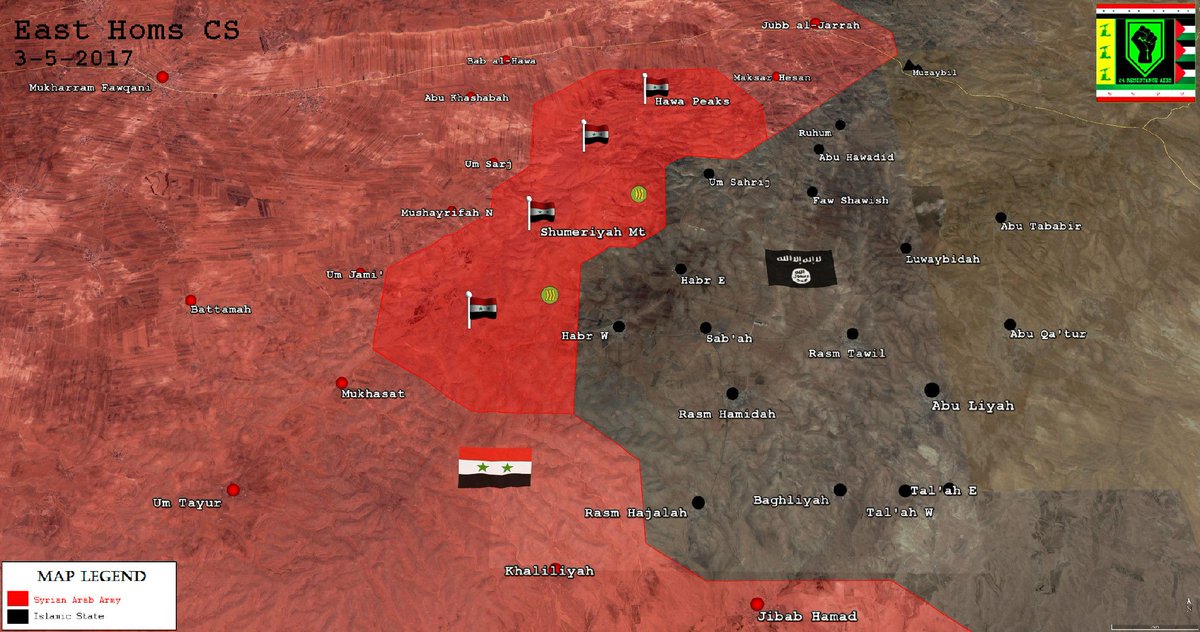 Situation east of Homs, HD version of this map can be found here. Source: 24 Resistance Axis

Islamic State killed 12 members of Iraqi Special Operations Forces in Yarmouk district, west Mosul according to a statement released by Amaq agency. In the attack one Humvee was also allegedly destroyed.

According to Amaq Agency yesterday’s twin IS suicide bombing in Al-Malaeb neighborhood, Ramadi allegedly killed 32 and injured 44 policemen, for comparison Iraqi sources claimed only five injuries from yesterday’s attack out of which only one was a policeman.

On the 2nd of May 2017 CJTF-OIR has conducted 13 strikes in Syria. CJTF-OIR‘s main focus in Syria at the moment is Tabqa-Raqqa-Deir al-Zour region where they did eight strikes supporting SDF‘s operation against IS destroying 12 IS fuel tankers, an IS wellhead, an IS oil pump, three fighting positions and suppressing a mortar team.

Other area where five strikes occurred is Abu Kamal destroying three IS oil pumps, three IS wellheads and a fighting position. Full report on CJTF-OIR strikes conducted in both Syria & Iraq can be found here.