Hello and welcome to the 79th installment of the SWD.

SDF captured remaining two districts in Tabqa city from IS, after these advances the latter only maintains presence in the southern part of Tabqa Dam and surrounding area. However, clashes erupted in newly-captured districts between SDF and IS as IS fighters pretended to be civilians and opened fire on SDF positions in the districts north of Tabqa. 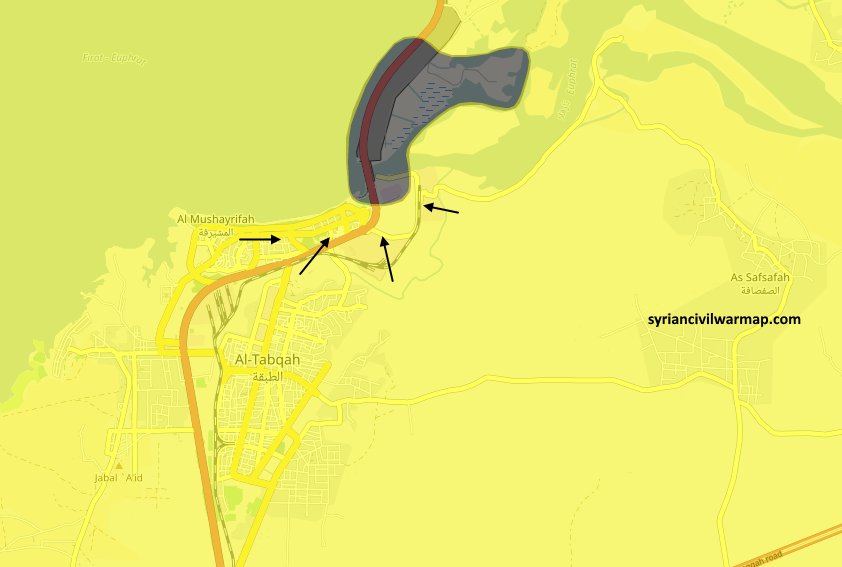 IS launched an attack on Al-Shaddadi near the front line with SDF but also targeted a refugee camp in the area. Reports suggest that at least around 30 were killed and according to some more than 100 civilians were injured in the heinous attack which included five suicide attacks. IS’ media outlet Amaq Agency reported an inghimasi (suicide fighters) attack on Al-Shadaddi which killed 10 SDF fighters, according to Amaq targets of the attack were bases with US Army presence.

Approximate situation around Al-Shaddadi. Source: Interactive Rurikmap which can be found here

Islamic State launched an attack on SAA‘s positions near Palmyra Silos and Al-Talila east of Palmyra, several points were captured by IS along with some ghanima (war spoils) and SAA suffered 11 casualties.

Rebel group Maghwar al-Thawra reportedly captured Wadi Sawab, Muayzilah, Tarwaziyat al-Atshanah and the vicinity of T3 airport & pumping station. Provided that Maghwar al-Thawra actually captured these localities, keeps control of them and doesn’t retreat or gets pushed back by IS, it is in a really good position to endanger and stop any future SAA operation from Palmyra aimed at relieving the siege of Deir al-Zour.

Evacuation of Sabna, north of Damascus near Lebanese border happened today, around 100 rebels along with their families were transported towards rebel-held areas in Eastern Qalamoun.

Faylaq al-Rahman’s deputy commander, captain known as Abu Najib (Nabil al-Jawbrani) was killed by Jaysh al-Islam’s sniper in Zamalka where Jaysh al-Islam has tried to advance over the past few days. Rumors spread by sources in East Ghouta claim that Abu Najib was killed while on his way to negotiate with Jaysh al-Islam.

Jaysh al-Islam launched a counterattack in Qaboun pocket after the latest SAA gains, several points were recaptured in Qaboun and Tishreen neighborhoods. In the clashes 10 SAA soldiers were reportedly killed, one SAA tank destroyed with its crew killed and one T-72 tank damaged.

Jaysh al-Islam targeted IS fortifications in Yarmouk Camp south of Damascus from Yalda west of Babbila. IS fighters were also targeted by Jaysh al-Islam’s snipers in the same area.

Situation south of Damascus where Jaysh al-Islam targeted IS’ positions. Source: Interactive Rurikmap which can be found here

Iraqi Army conducted several night raids on Islamic State-held neighborhoods in the Old Mosul district, however, the latter also conducted an operation of their own in the district. In an inghimasi (suicide fighters) operation according to Amaq Agency’s statement IS killed seven “SWAT” members, mostly likely referencing to Iraqi Special Operations Forces or popularly known as the Golden Division.

IS launched an attack east of Al-Rutbah in western desertous part of Anbar governorate, attack was eventually repelled leaving 10 Iraqi soldiers dead and five wounded, furthermore IS claimed to have destroyed a Humvee. Following the attack curfew has been imposed in the city out of fears of future IS attacks since there are rumors circulating about the future attack on the area.

Twin suicide attack by IS hit police station’s vicinity in Al-Malaeb neigborhood in Ramadi, both attackers were shot by security forces which made them detonate far from their target and also resulted in lower casualty number, four civilians and one police officer were injured in the attack.

IS conducted an inghimasi operation in al-Khadra district, northeastern Samarra storming Iraqi Federal Police headquarters in the district and completely destroying it. Clashes later occurred in Al-Salah district where an IS fighter blew himself up reportedly killing 30 members of security forces.

Iraqi Army foiled an IS suicide attack on Al-Tarmiyah, suicide bomber was on a motorbike and was killed before successfully reaching its target.

On the1st of May 2017 CJTF-OIR has conducted 20 strikes in Syria. CJTF-OIR‘s main focus in Syria at the moment is Tabqa-Raqqa-Deir al-Zour region where they did 20 strikes supporting SDF‘s operation against IS destroying four IS wellheads, four IS barges, an IS weapons facility, five IS oil stills, two vehicles and a fighting position; and suppressing an IS tactical unit.