Hello and welcome to the 74th installment of the SWD.

Turkish artillery continues to target SDF-held localities around Afrin, there were even reports about Turkish warplanes hovering over the area. Clashes have erupted between SDF and Turkish Army around Rajo town northwest of Afrin near Syrian and Turkish border, according to pro-SDF sources 17 Turkish soldiers were killed and three wounded in clashes, take these casualty numbers with a grain of salt since there is no evidence to prove these claimed casualties.

SDF completely captured Al-Wahab and Al-Izaa neighborhoods in Tabqa from IS, besides this Radio Station west of Tabqa was also captured. During clashes in the city 20 IS fighters were killed, 10 captured and four vehicles destroyed. SDF released footage showing a captured IS T-55 tank in Tabqa.

Number of YPG fighters killed in clashes with Turkish Army is allegedly between 9 and 17. Ahrar al-Sharqiya, a Free Syrian Army group operating in northern Aleppo sent a convoy supposedly heading towards Turkish border crossing, convoy’s destination is Tall Abyad which they reportedly intend to capture from SDF/YPG. 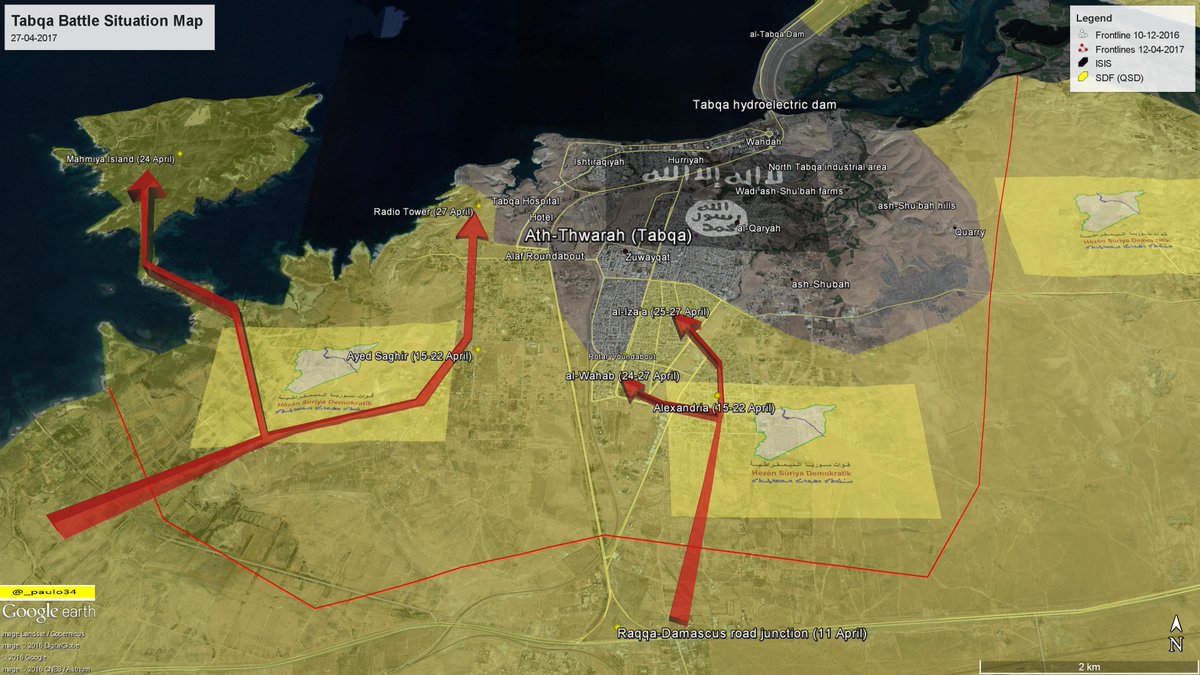 From Turkish viewpoint the offensive would be aimed at securing Turkish border from groups disliked by Turkey. Official statement from Turkish Armed Forces stated that only two soldiers were wounded in yesterday’s clashes against YPG. 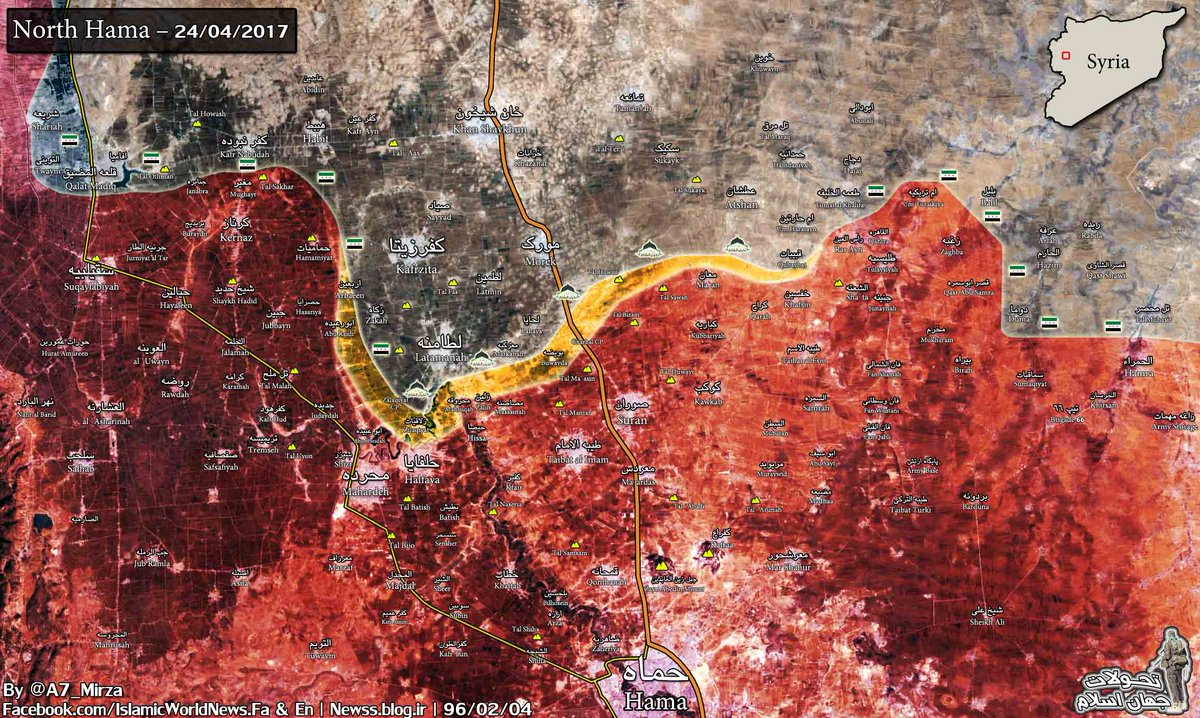 Situation in northern Hama (nothing has significantly changed territory-wise in three days), HD version of this map can be found here. Source: Islamic World News

SAA captured an abandoned battalion north of Tiyas Military Airbase (T-4 Airbase) and fully captured Jabal al-Abyad northwest of Palmyra from IS. SAA has also fully secured all Shaer oil wells including the biggest well named “Well 105” located in the northern part of the field, yesterday it was reported that SAA captured Shaer gas field but it appears that only today its area was fully cleared from IS presence.

Last night Israel targeted area close to Damascus International Airport with five missiles. Strikes targeted either a warehouse or a fuel tank since the fire erupted after the attack and was visible from far away. According to the Israeli Minister of Intelligence Israel targeted a weapons shipment destined for Hezbollah.

Israel targeted a drone belonging to SAA & allies with a MIM-104 Patriot surface to air missile system after the drone entered Israeli-controlled Syrian Golan Heights. Drone was monitoring rebels’ defenses in Quneitra governorate and accidentally wandered off into Golan. It is still unknown if the drone was destroyed or not.

IS opportunistically attempted to attack Al-Hashd al-Shaabi’s positions southwest of Tal Afar now that major part of the troops is engaged in an operation southwest of Mosul in Al-Hadhar region. The remaining Al-Hashd al-Shaabi’s fighters were able to fend off the attack after clashes that lasted several hours. IS reportedly suffered heavy loses in this attack as around 80 fighters were killed and 17 SVBIEDs destroyed.

Al-Hashd al-Shaabi have captured Al-Hadhar village from IS, the main target of Muhammad Rasul al-Allah (Prophet Muhammad) operation which might have more phases in the future and this is just the end of the first one. The capture of Al-Hadhar doesn’t come as a surprise since it was encircled after yesterday’s advances and stormed.

Besides Al-Hadhar other localities captured from IS today include Um al-Ajareej, “Ancient Ruma Site” and Tareeta. According to Iraq Joint Operations more than 150 IS fighters were killed today in Al-Hadhar region and 30 houses cleared from improvised explosive devices planted by IS, additionally 20 IS SVBIEDs were destroyed during today’s clashes.

IS SVBIED attempted to target an Iraqi Army’s checkpoint on a road between Baghdad and Khalis northeast of Baghdad. SVBIED was destroyed by Army before it reached desired destination.

On the 26th of April 2017 CJTF-OIR has conducted 14 strikes in Syria. CJTF-OIR‘s main focus in Syria at the moment is Tabqa-Raqqa-Deir al-Zour region where they did 13 strikes supporting SDF‘s operation against IS destroying eight IS wellheads, five oil processing equipment items, two IS barges, six fighting positions and a fuel truck.

Other area where one strike occurred is Abu Kamal engaging an IS tactical unit. Full report on CJTF-OIR strikes conducted in both Syria & Iraq can be found here.