Hello and welcome to the first of hopefully many editions of Syrian War Daily.

Main goal of this blog is to inform people who are interested in what’s happening in Syria, but don’t have enough time to spend observing events occurring throughout the day. This blog doesn’t have to be limited only to Syria, if there’s enough interest, it can be expanded to the other countries affected by the same/similar conflict such as Iraq, Libya, Yemen, etc.

Besides daily military updates, on this blog You can expect occasional in-depth analysis, speculations and other non military news related to Syria and/or wider region.

First edition of SWD (Syrian War Daily) is significantly longer than the future ones will be, it includes news embedded with backstory, current situation and speculations.

Military events are listed below by governorates:

Today SAA (Syrian Arab Army) Tiger forces have continued their advance against IS forces and have taken control of Abo Jabbar and al-Magharah villages.
One of the offensive’s objectives might be linking up with SDF (Syrian Democratic Forces) in the Manbij area, therefore depriving Turkey and it’s puppets from occupying more Syrian territory and ending their dream of taking Raqqa through IS-held area. In this scenario Turkey would be forced in direct conflict with either SDF or SAA in order to take Raqqa. Direct conflict with either of the aforementioned parties would pit Turkey against the USA and Russia respectively.

Even though most people have an opinion that the USA wouldn’t risk relation with strategical NATO partner Turkey over a militants group, recent moves by the new US administration could prove some people wrong with their delivery of APCs to the SDF.

Important thing to note is that Aleppo has been without water for a month now. Main goal of the whole SAA operation should be liberation of Maskanah and water pump for Aleppo near it.

TFSA (Turkish-backed Free Syrian Army) continues to make progress in Al-Bab and now according to some source controls about 40% of the city. However, they are still unable to take Qabasin and Bzaah without being routed by IS (Islamic State) shortly after taking control.

Map showing advances made exclusively by government forces south from Al-Bab. Map above is outdated with Tiger Forces taking al-Magharah directly east of Rasm al-Sirhan and Abo Jabbar northeast from it, marked on the map in arabic. Source: @loomisroberto 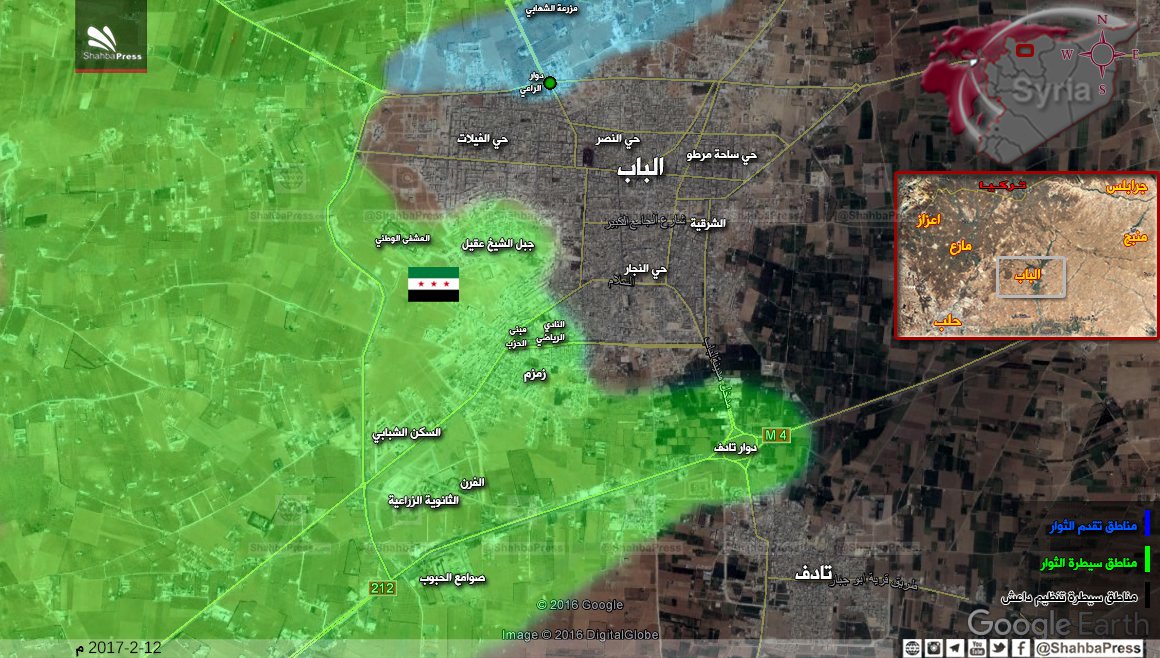 SDF have started 3rd phase of operation to liberate city of Raqqa and it’s surrounding countryside from IS. This phase of operation focuses on the eastern flank, with SDF forces already making significant progress, while IS reportedly launching counter-attacks on the western flank with minimal gains.

Approximate situation around the city of Raqqa, map could be outdated at this point. Source: @C_Military1

SAA backed by recently arrived Desert Hawks and Russian air force are engaging in heavy clashes with IS in E. Homs after being pushed from Hayyan gas facility. Closest SAA & allies positions from Palmyra  are hills near Hayyan which puts them at least 40km from the town.

Situation in Deir al-Zour is still looking bad for the government forces, but not as bad as it was weeks ago. Frontlines have stabilized and gov. forces started counter-attacks to reverse IS gains. Clashes are mainly taking place in the cemetery area and there is still  a siege on al-Zour’s airbase. Worth noting is that counter-attacks are achieving it’s goals very slowly compared to the initial offensive by IS which took areas in few days.

Map from the beginning of february, should still be accurate with some gains omitted from the gov. side. Source: Al-Masdar News

In the north of the governorate, HTS (Hayyat Tahrir al-Sham) continues attacking LAA (Liwa al-Aqsa) after the latter allegedly pledged allegiance to the IS. LAA has been targeting FSA (Free Syrian Army) factions in the S. Idlib – N. Hama region capturing over 17 localities according to the Southfront article. It was claimed today on Twitter that LAA used suicide bombers and VBIED against HTS forces. Heavy clashes between the two are still ongoing. End goal of LAA could be Ithriyah area which would enable them to connect to mainland IS territory.

After finishing Wadi Barada, SAA shifts it’s focus on other pockets of resistance. Upcoming hyped operation of E. Ghouta should start if Astana 2 peace talks fail. Besides E. Ghouta operation, some unconfirmed reports suggest that SAA could also launch an attack on Barzeh-Qaboun pocket forcing armed groups to reconcile or leave in buses to Idlib.

Clashes continue for the 2nd consecutive day in the city of Daraa, mainly in Al-Manashiya district. Statement released by Al-Binyan al-Marsous operation room claimed destruction of government’s 23mm gun (ZU-23-2), 1 tank at the outskirts of the Al-Manashiya district and casualties among gov. ranks following 2 VBIEDs and a tunnel bomb which allowed them to advance. Government supporters on social medias denied any advances made by groups,  however they said that the army retreated from some areas to allow SyAAF and RuAF to deliver more effective sorties on the opp. held areas. Newer statement by the operations room leading the offensive stated that they have taken control of the buildings in the area of the yesterday’s tunnel bomb. Later in the day same operations room claimed further significant advances in Al-Manashiya district. Hopefully in the next edition of SWD situation in Daraa will be clearer. Latest reports suggest that Jordan has blocked wounded militants from entering its territory.

Offensive started by armed groups hasn’t resulted in any major gains yet, only limited ones, but clashes took heavy toll on both groups involved in fighting. South Front which was once seen as the last bastion of the true moderate opposition is slowly sliding into irrelevancy amid growing islamists power in the south of Syria.

Daraa front has been frozen for some time after armed groups suffered heavy losses in the battles of 2016. What prompted them to attack is still mainly unknown. As some have noted, attack could be their last chance to obtain the most favorable position before Astana 2 talks start. Another explanation for the attack is that moderates groups were bullied once again by radicals to start a new offensive against government. 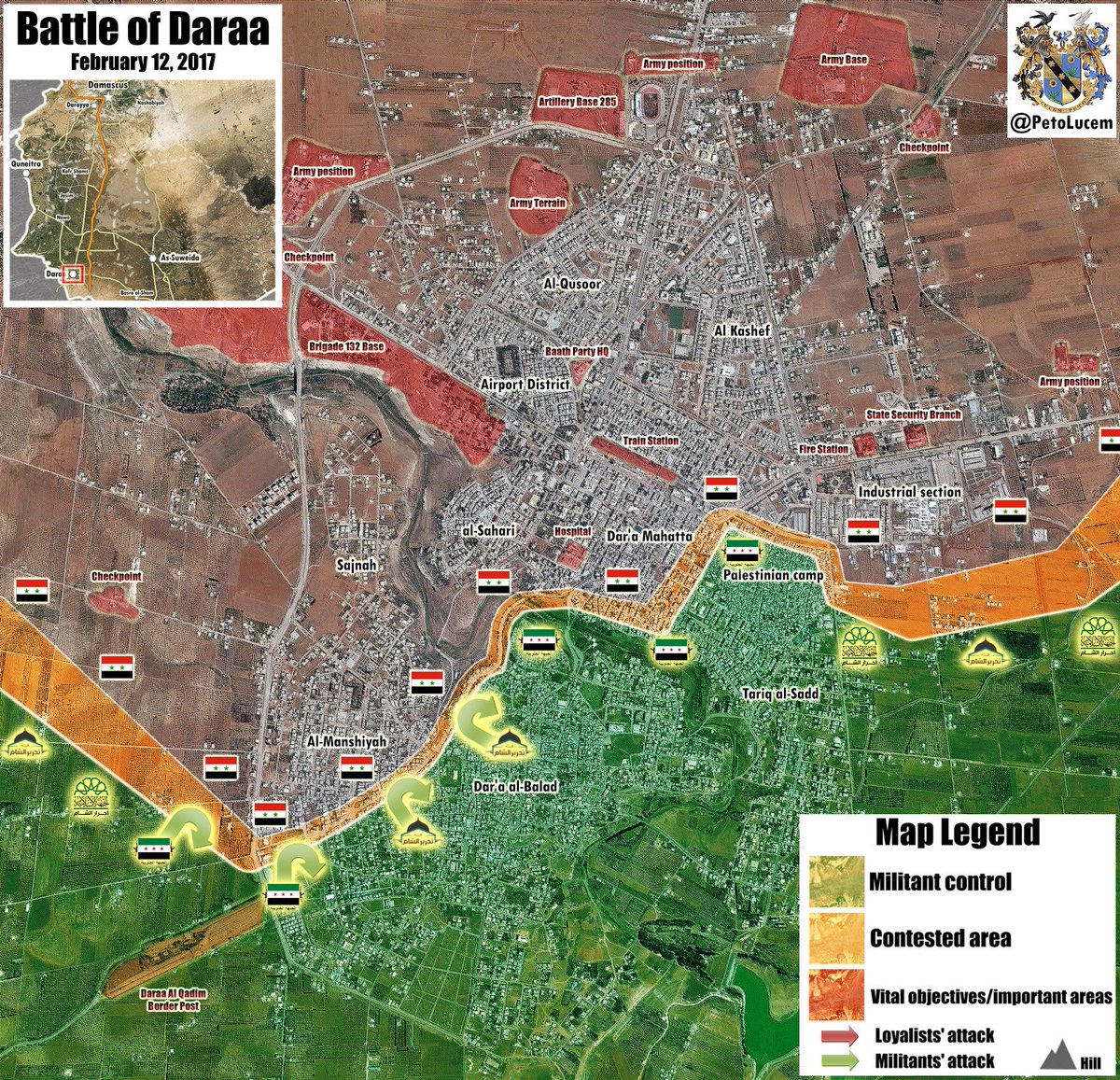 Map showing situation in Daraa (NOTE: Map does not show any advance made by any of the parties and it’s just used to demonstrate current approximate situation in the city.) Source: @PetoLucem

Feel free to voice your opinion in the comments below, constructive criticism is welcomed.

Intellectual credited property used in posts may vary from day to day.